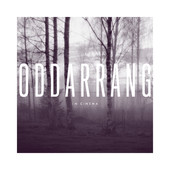 This is one of those albums that defies genre.  It’s a mix of jazz, folk, classical, post-rock, ambient minimalism, and any number of other potential influences that can be picked out from the soup of Oddarrang‘s singular sound.  Their previous album, Cathedrals, was featured on this site as part of its Something Different review series.  Their newest, In Cinema, dashes straight past the designation of Something Different and heads straight out into Beyond Jazz territory.

Recalling the pop-orchestral sweeping grandeur of post-rockers Cinematic Orchestra, the Oddarrang quintet, the lofty drifts and accelerations of alternative folk act Balmorhea, and the dramatic builds of indie-rock group Arcade Fire, founder Olavi Louhivuori culls together the music arranged for four separate films into one album soundtrack.  Moody at times, pensive at others, and replete with sudden surges of dramatic articulation that blow the lid off any peaceful scenes previously established.

Louhivuori often adopts a comforting sound on drums, but on a track like “Missing Tapes from a Highway Set,” he slips into a martial cadence to drive the track forward.  Sakara’s guitar shapes both of the prominent hooks of “The Sage,” opening with a casual gait before shifting gears and charging forward with a head full of steam… yet no less caring with the embrace of the melody.

On an album of frequent bursts of intensity, it’s a pleasant turn of events that Pohjola chooses to emphasize the trombone’s delicate aspects… the slow soulful drift of trombone on the melody of album opener “Introducing” sets a tone of gentleness and warmth that carries throughout the album, even when the volume erupts in a torrent of sound.

Ikonen leads the way melodically on cello as often as it unleashes its harmonic warmth on tunes.  “Cultivate and Contemplate” sees Ikonen setting the groundwork for the rest of the ensemble to launch from, as well as aiding in the melodic development.  When “Self-Portrait” breaks into its second-half melodic frenzy, it’s left to Lindgren’s bass to provide some badly needed deep resonance to balance the bright and shiny notes that the rest of the quintet launches off into flight with.

Though having participated recently on more straight-ahead sessions, like those of the Alexi Tuomarila Trio and Claudio Filippini, it’s clear that those forays haven’t dulled Louhivuori’s particular creative form of expression as he returns to more familiar territory.

Music from the Helsinki, Finland scene.

Read the review of Oddarrang’s previous release Cathedrals, HERE, on Bird is the Worm.