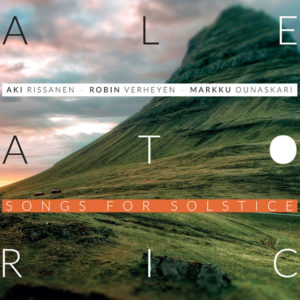 Songs for Solstice is an album of shifting tides, and the joy to be derived from it is discovered in the changing tones rather than its inherent motion.  In fact, despite tempos that modulate between states of turbulence and tranquility, the abiding motion keeps to a common center of gravity.  The combustible “Insomnia” kicks up some dissonance in between bouts of silence, and yet when the Aleatoric trio switches things up with the tuneful “Deep Sea Diving,” the cadence pops with the same spark of life as its predecessor.  The trio of pianist Aki Rissanen, saxophonist Robin Verheyen and drummer Markku Ounaskari seem to approach this music as would a photographer who specializes in Black & White imagery, and advance with the attitude that the existence of only two colors is belied by the focus on all of the minute shades in between.  And the album’s best evidence of this viewpoint is in how “Riverly/Reflections on Scriabin Prelude op.13 No.1” glides between expressions that span the panorama of solemn reverence to fierce intensity.  And meanwhile, the motion keeps to a tight ball of intensity, radiating strength while refraining from any wild swings in emotion.  This approach snaps right into place with the trio’s focus on all the shades in between.

An intriguing album with a neat, focused perspective.

Recommended: JASS – “Mix of Sun and Clouds” These are videos that I like: JASS, new album, old tour