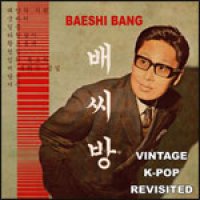 An interesting project I’ve encountered is from Paris-based quintet Baeshi Bang, who have put out a couple recordings that dive into the songbook of 1960s K-pop crooner Bae Ho.  Between their two recordings, a 2014 release and one that just came out in April of this year, Baeshi Bang find a range of expressions for the Korean pop singer’s original works.  Some tracks hit a modern Parisian jazz sound, which lays on the melody thick with heavy ambient attributes while counterbalancing it with tempos that punctuate the beat to get the point across.  Then there are tracks that drawl out a heavily sweet pop music influence, and possess a personality that’s shiny and bright.  And then, interestingly, there are tracks that exhibit a classic Motown R&B groove or an Ennio Morricone cinematic flair that flirts with surf rock.  There is also an instance where some electronics and effects blend into a classic late hard-bop period piece, when long strides were being made by artists into free and spiritual jazz forms of expression.  The use of traditional Korean instruments like the gayageum and non-traditional like the French horn add even more texture to this intriguing music.

The range of expressions is likely to guarantee that some tracks will sit better with your ears than others.  That’s something that can be said about most projects by most bands, but this quintet’s willingness to vastly expand their perspective on the original source of their inspiration increases the likelihood of that effect.  It was something I encountered myself.  That said, there were several tracks found in their output that I really took to.  Add that to the interesting theme of the project, and, well, I really wanted to post something about this project.

They’ve got a new album out, Vintage K-Pop Revisited, released on the Buda Musique label.  Their first album, Old School K-Pop Revisited, was a Self-Produced recording released back in 2014.  The two albums share some compositions, but it does appear from available information found online that they are different renditions recorded in separate years.

There’s all kinds of opportunities out there to listen while deciding whether to purchase the album.

Here’s an embed of some album tracks off their newest release, which you can find on the Buda Musique Soundcloud page…

You can listen to more music on the Baeshi Bang Soundcloud page as well as their Bandcamp page (linked to below).

Also, on the Baeshi Bang site, they have a page where you can listen to their versions and the Bae Ho originals side-by-side, which is pretty cool.  Here’s a LINK to that page.

You can buy their first album on Bandcamp (LINK).

Their most recent album is on Amazon (LINK).

And here’s a nifty video with an album track from their latest.  The song is called “Ilchul,” but it also seems to be called “Sunrise” on the album…

Recommended: Isis Giraldo – “Padre” A rundown of some good stuff on the For Tune label (Part One)