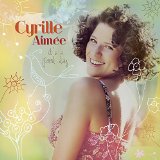 An enjoyable album that floats my boat every time I put it on is It’s a Good Day, the new one by vocalist Cyrille Aimée. Encompassing her varied background, Aimée’s sextet is comprised of three guitarists, each bringing their specialties in Gypsy swing, Brazilian and NYC Jazz to the mix.  The bevy of guitars, each with their different sound, adds some seriously inviting texture to the affair.  This, in addition to the music’s cheerful disposition and the way its off-the-cuff delivery provides a pleasantly casual feel to energetic tunes is why this album stays in the listening rotation.

Tracks like “Where or When,” “Bamboo Shoots” and “Young at Heart,” with their easy cadence, a bit of twang, guitar notes that waver alluringly atop brisk rhythms is this album at its best.

That said, the Gypsy swing of “It’s a Good Day,” “Pourtant,” “Love Me or Leave Me,” and a rendition of Duke Ellington’s “Caravan” are not only strong tunes, but their up-tempo presentation enhance the easy-going nature of other album tracks.

Bassist Sam Anning contributes a composition to the session, and his “Bamboo Shoots” provides a nice bit of pop song simplicity to the affair.  It’s also seriously pretty.  And speaking of pop songs, the only speed bump encountered on this recording is a cover of Michael Jackson’s “Off the Wall,” which is just awkward enough that it doesn’t sit quite plumb with the album’s prevailing flow.

The whimsical “Nuit Blanche” is one of two tracks that has Aimée switching to French.  The shift in language provides some nice differentiation and adds some extra personality to a recording with plenty to spare.

For an alternate view of Aimée, go give a listen to her sing with the Chicago Jazz Orchestra on their 2013 release, Burstin’ Out.  A good album that was one of my eMusic Jazz Picks back when it was released.