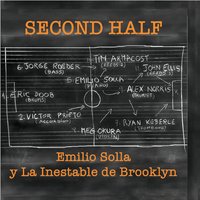 It’s pretty damn impressive how Emilio Solla brings together the quaint and the epic within the span of any one particular song.  Joined by his La Inestable de Brooklyn on the new release Second Half, Solla crafts each song so that it captures moments of calm reserve and breathless euphoria.  It’s not easy to shift the tone and tenor from one extreme to the other and still do it in a way that doesn’t come off as contrived or clumsy, while allowing the development to sound as natural as breathing.  That he accomplishes this feat in a context where jazz, Argentinean folk, tango, and chamber are all in play and a major factor in each and every song is as astonishing as the music itself.

The gentle piano introduction on opening song “Llegara, Llegara, Llegara” and the way it leads into bigger and bigger statements from wind instruments, violin and accordion is the kind of dramatic build common to this excellent recording.  And the way in which a sound so massive as to originate from a jazz orchestra seamlessly shifts into a charming Argentinean folk interlude before building back up to a dramatic finish speaks to the heart of this recording.

So, too, does songs like “Chakafrik” and “Raro,” which filter tango through a jazz net, creating gorgeous strata of melody sealed in place by thick folds of harmony.  It’s symbolic of many of the album’s songs in the way chipper, energetic rhythms slide into and out of harmonic digressions without a hitch.  “Suite Piazzollana, Pt. 1” proves that the changes of pace and influence that mark this album are just as effective at the speed of a ballad as they are in up-tempo mode.  The shift between Argentine folk and NYC swing on “American Patrol” brings even further definition to the craftsmanship at work on this recording.

Solla’s ensemble is a ridiculous wealth of talent, with individual musicians garnering plenty of mentions on this site and the eMusic/Wondering Sound Jazz Picks column.  It’s yet one more reason to scoop up this marvelous recording.  With its abundance of warmth, liveliness and strong musicianship, Second Half should be on listeners’ radars in 2014.