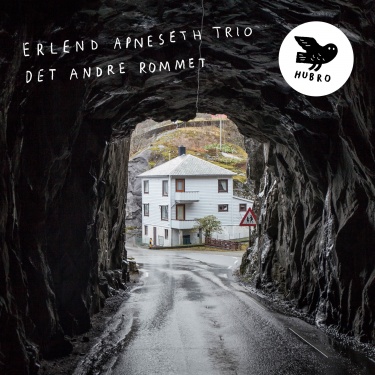 It’s a compelling sophomore release from Erlend Apneseth, and a huge step up from his debut.  That debut, Blikkspor, was just a vehicle to display his talent on Hardanger fiddle.  The album was very much in the folk idiom and didn’t really seem to aspire to anything more than what would normally be expected.  On the other hand, his newest, Det Andre Rommet, is a fascinating display of his range on fiddle, encompassing a number of different influences and forms of expression.  Apneseth is joined again by guitarist Stephan Meidell and drummer Øyvind Hegg-Lunde, and this time around they really mesh as a working trio, with each member’s voice informing the proceedings.  This, plus a deft use of electronic effects and alternate percussion really provides the affair with a huge surge of personality.

Some tracks eschew influence for the development of a certain ambiance.  “Trollsuiten” is the welcoming warmth of a fireside seat, the strings serving as a comforting blanket of harmony while issuing melodic fragments that flicker with an enchanting motion.  The warped effects of “Under Isen” are no less striking than the ringing of bells, and the meshing of sounds electronic and organic add flavor to this multidimensional recording.  The fluttering “Dialog” is nothing more, nothing less than a solitary feather caught up in the wind’s embrace.

But then there are those tracks that can be traced back to established forms of expression.  Title-track “Det Andre Rommet” grows increasingly free and dissonant from its opening expressions, which more resembled the twinkling of distant stars on a clear night.  The Nordic folk element comes through strong on “Sapporo” and “St Thomas-klokkene,” whereas on a track like “Magma,” the indie-rock element shines through with an ambient drone and warped melodicism reminiscent more of Radiohead than jazz.  “Hugskot” brings all of these influences together with a balanced approach and an alluring tunefulness.

Plenty of gorgeous moments on this unconventional recording… one that shows an artist whose creative arc is in ascension.