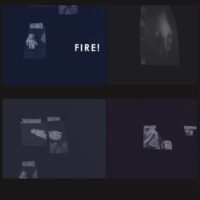 For me personally, it’s kind of jarring to be reminded that the Fire! Orchestra got its start as a trio.  The large ensemble variant has spent the last handful of years putting out some of the most exciting music to hit the shelves.  It’s music that I find particularly rewarding, especially in that singular way the ensemble forms a handshake deal between unbridled chaos and innate tunefulness bordering on catchy.  The intensity that derives from this tenuous agreement between typically warring qualities is something that registers strong on my enjoyment meter.

As a trio, saxophonist Mats Gustafsson, bassist Johan Berthling and drummer Andreas Werliin present the core of that agreement in its simplest terms.  The foundation of repetition that nurtures the catchiness is evident throughout their latest release The Hands, as is the naked edginess that obliterates that repetition without warning.  Missing are the rich textures and massive presence of the trio’s Orchestra ensemble, and while it’s an absence I’m not particularly fond of, it is refreshing to hear again what beats at the heart of that music.

Listen to more of the album at the artist’s Soundcloud page.