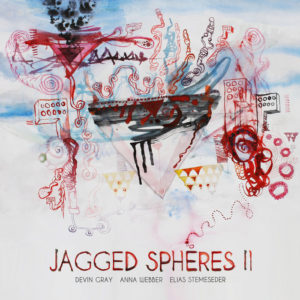 The Jagged Spheres trio builds a world within a world on their sophomore release, II.  The melodies are one such world.  To live in this world is to live in tiny spaces shaped with a precise beauty.  These melodic fragments are sometimes tight little arcs and other times the fragments possess a sing-song motion and then there are those resembling a satisfied sigh.  To live outside this world is to exist in a world of unending chaos, of dissonance that crashes and groans and strikes in every single direction.  The first world is set inside this tumultuous environment, and the truly remarkable quality about this recording is how the trio allows it to remain completely unscathed.  Tracing the path of a melody on this session is to watch a figure walk through the heart of a hurricane and emerge from the other side untouched by even a single raindrop.  It’s fascinating to see this pattern repeat again and again, and the attention is perpetually divided between the perilous journey of the melody and the frenetic excitement of its environment.  Even in the relatively calm opening of “Snatched,” it’s a pattern that repeats itself.  In fact, witnessing it occur in a wide open space and speaking rarely above a murmur, it brings home just how delicate the process must be.

Their 2014 debut (as a trio) was one of my Wondering Sound jazz picks.  It was a curious album then, as it still is now.  Their follow-up possesses a more cohesive vision and a methodology to see it through.  It’s no less strange than the debut, but that strangeness just seems to make more sense the second time around.

My interview of Daniel Herskedal is up at The Bandcamp Daily Preview “Cross-Platform Interchange,” the upcoming release from Misha Mullov-Abbado