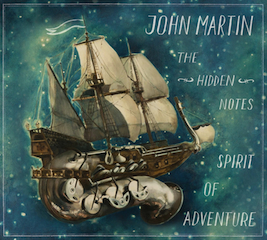 It’s particularly interesting how tenor saxophonist John Martin gets his sound to phase in and out of tunefulness, shifting between a sweet melodicism and raw ferocity.  But what marks the success of Spirit of Adventure is how the quintet The Hidden Notes shifts their ensemble sound to either shadow Martin’s changes or perfectly counterbalance them in a fusion of light and dark.  A track like “Folklore” has a film-noir allure, and it holds that cinematic ambiance even as Martin’s sax burns the film at the edges.  The effect of wonderment is not unlike seeing two people who have nothing in common somehow live in a state of happily-ever-after.  But that song doesn’t exist in isolation.  This is a recording where captivating moments, as on title-track “Spirit of Adventure,” where sax is the perfect dance partner for the rest of the quintet, and their motion is like one, steeped in grace and filled with joy.

But it’s not just about sax versus or united with quintet… the pairing of vibraphone and guitar also leads to all kinds of melodic beauty and rhythmic chatter.  The two-part “Pentacision” is Exhibit A in how Ralph Wyld and Rob Updegraff keep finding ways to weave their own conversational patterns within the fabric of the songs.  This, too, can be said about the interactions between bassist Tim Fairhall and drummer Tim Giles.  On “Eddies,” Fairhall’s loping strides hopscotch around the puddle splashes of Giles’ cymbals and drums, creating a sense of tension that hangs just below the surface of the song.

A very cool personality to this one.  And it beats to the rhythm of a storyteller’s heart.

Listen to more album tracks on the artist’s Soundcloud page.

Jazz from the London scene.