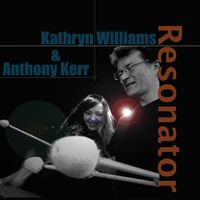 Stripped down and melancholy, this duo collaboration between vocalist Kathryn Williams and vibraphonist Anthony Kerr breathes new life into old standards with barely more than a whisper.  Williams voice is the fog on a misty night, exhibiting a big presence from a state of stillness.  On vibraphone, Kerr hovers about the melodies, giving them just the slightest push before letting their motion fill out the rest of the image.  There is an evocative moodiness applied to the standards that comprise Resonator, sourcing to the core of the melodies and letting them breathe on their own with only the sparsest outline or direction.

There is something particularly appealing about the way the duo maintain a tranquil demeanor throughout.  Neither artist goes about expressing their personality onto the pieces, which would be, in most instances, a fatal flaw for a recording.  But after all of the uncountable renditions of songs like “My Funny Valentine” and “You Don’t Know What Love Is” and “Ev’ry Time We Say Goodbye,” it is as if those songs have lost all meaning and their existence has been superseded by that of the artists.  But there was a time that each of these songs had only been performed a handful of times, and they felt as wide open as the universe and not weighed down by the continuity of being passed from voice to voice, instrument to instrument, vision to vision.  Hearing these songs with only the barest treatment almost makes them new again.

A few tracks add accompaniment with strings or trumpet, and while there’s nothing wrong with those contributions, the album would’ve been stronger letting the duo do their thing unimpeded.  On “Stormy Weather,” Williams’ voice rises up as if forced to find a middle ground between the quieter tones from vibes and bass and those of trumpet that seek to take off and soar.  It doesn’t shatter the abiding tranquility, but on an album whose success depends on not disturbing the perfect surface of the lake, any kind of ripple is gonna get noticed and not favorably.

The enchantment of Resonator reaches its peak when it’s just Williams and Kerr dictating things, keeping it peaceful and placid and unhurried, exerting only the tiniest influence over the songs.  They honor the songs by keeping their fingerprints to a minimum.  When Williams coaxes the melody along with the slightest curvature of a note, allowing notes to hang in the air and fade away gracefully, the beauty of the pieces is magnified, resulting in a much greater impact than the activity might otherwise indicate.

Are there many sights more breathtaking and lovely than a solitary balloon floating effortlessly across the horizon?  And all the effort required to set that beauty into motion was a child simply letting go and allowing the balloon to do what it was born to do.  Resonator is the proof that this is a concept Williams and Kerr take to heart.

Released on One Little Indian Records.

Listen to more of the album at the artist’s Soundcloud page.

Jazz from the UK.

These are videos that I like: Psychic Temple and Stijn Demuynck Recommended: Waclaw Zimpel – “LAM”