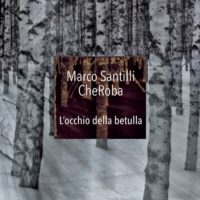 L’occhio della betulla is the second of two releases from Marco Santilli in 2017, and it’s no less mesmerizing than its counterpart.  For this session, it’s only his CheRoba quartet (on La Stua, they were joined by the woodwind quintet il Fiato delle Alpi), but the smaller outfit doesn’t sacrifice anything in emotional impact.

This mix of chamber, jazz and folk accentuates the beauty of a simple melody, and patiently illustrates how a universe of possibilities exist within the nuance of each.  These are tranquil pieces.  They bubble with life and each has its own personality, but there’s no doubt they all source from the same vision at the same point in time and space.  When percussionist Fulvio Maras incorporates a hang drum on “Agasul,” it has the same soothing effect as when Lorenzo Frizzera switches to 12-string guitar on “Variationen über den Namen Hesse.”  And when Santilli’s bass clarinet provides the cover of shadow on the sunny tune “Saphyrion,” it springs from the same inspiration as the bustling excitement of Ivan Tibolla‘s piano on title-track “L’occhio della betulla.”  All of it snaps into place, in its own time as the album passes through it.  And even when the intensity spikes on “When Hermann Meets Hari” and “Come le Foglie,” the air is still thick with the serenity of previous passages spread out across the album’s timeline.

A brief round-up of what’s new on ECM Records Recommended: Ron Miles – “I Am A Man”