Recommended: Max Johnson – “In the West” 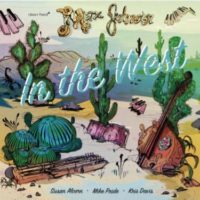 The latest from Max Johnson is a sprint and a marathon.  Even during the silences that mark In the West, there lingers the strong impression of developments moving fast.  But more often than not, the bassist is exceedingly direct.  The relentless downpour from pianist Kris Davis and the pedal steel guitar of Susan Alcorn are as much the determining factor of the rhythmic impact of “Greenwood” as is Johnson or drummer Mike Pride.  “Ten Hands” kicks up a fun little bounce as it scampers along, and it’s a motion that sticks around even as the piece deconstructs into something not quite so singularly focused.  The transitions between those states of being are as swift and abrupt as the tempo itself.  It’s like an intentional scarring on the surface of the music or, perhaps, not unlike the weathered signs of aging on the face of a life well-lived.  It signifies the album’s personality.  And when the quartet wraps things up with an arrangement of Ennio Morricone’s “Once Upon a Time In the West,” the passages of sublime melodicism and fluidity reveal that the depth of the album’s personality is as much the result of the strength of the vision as it is the method of delivery.