Recommended: Michael Dease – “All These Hands” 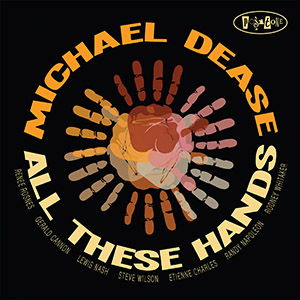 Trombonist Michael Dease can always be relied upon for some tasteful straight-ahead bop.  Sometimes it ventures back to Hard Bop days and sometimes it lands square in modern post-bop territory, but the music is typically going to drive down the middle of the road and not go off-trailing anywhere.  There’s a certain comfort to be gained from that, especially in the context of a modern jazz scene that is as fractured and diverse as any genre out there.  That said, it’s nice to encounter something a little different from him on his new album All These Hands.  Front and center is the way his trombone meshes with the acoustic guitar of Randy Napoleon.  On his latest, Dease looks to reflect the spread of jazz through the United States, from its origins in New Orleans then with the Great Migration up to Chicago and the Midwest, and then over to NYC.  Whether the album meets those goals is up for debate.  Most of this music falls within Dease’s comfort zone, and how much that will allow him to truly represent the evolution of a music form over the course of decades is a matter of opinion more than anything else.  It’s also an ancillary issue as far as this music goes.

The marriage of trombone and guitar on songs like “Territory Blues,” “Delta City Crossroads” and “Memphis BBQ & Fish Fry” brings out a vibrant facet of Dease’s sound.  And while it doesn’t stray far from what falls before or follows after in the succession of album tracks, it comes off as something new and exciting.  It’s definitely not an anomaly to encounter the blues in Dease’s work, but to hear it coming from its roots rather than its stem is more than a little illuminating.  The sections of All These Hands that address other time periods in Jazz’s lifespan are perfectly nice.  In some cases, like the hopping “Good and Terrible,” the music shines with incredible strength.  But it wouldn’t be wrong to be a little hopeful that the next Dease recording would send himself and Randy Napoleon a little deeper into the territory to which they make a tantalizing visit.

Listen to more of the album on the label’s Soundcloud page.