Recommended: Never Enough Hope – “The Gravity of Our Commitment” 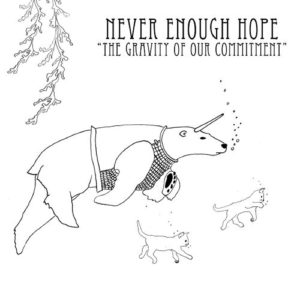 What makes The Gravity of Our Commitment so damn thrilling isn’t just that it has the expanse of a sprawling epic, but how each passage is rich with so many details.  Opening track “You Can Not Fight” begins as modern big band jazz, flashes an indie-pop smile of math-rock teeth, and then just continually morphs into an increasingly unclassifiable blend of elements.  It’s a pattern that Toby Summerfield and his big band Never Enough Hope keep cycling through on their excellent new release, where modern jazz, classical, rock, folk, and minimalism are just the bullet points of a much deeper narrative.

And with “You Can Not Fight”, that story is the conflicted love affair between organic and electronic elements, and how sometimes they burst into flight as if joined at the wing, and then sometimes break into flurries as if battling for supremacy.  The rich harmonics of “You Are A Gift To Me” level off into a drone, the patter of melodic fragments are like droplets off its surface… until the songs flips and those melodic fragments become whole and steer the direction of the piece.  The title-track takes a slightly different approach.  Instead of a cloudy mix of influences that alternate the dominant position, “The Gravity Of Our Commitment” lets one after the other frame the scene, like the changing landscape from a train window.  “The Responsibility of Purpose” charts a similar course, but the changes between scenes are even more dramatic.

It can’t be emphasized strongly enough how important it is that this album maintains a consistent perspective and a sense of cohesion throughout.  Pulling off this kind of work isn’t simple by any means, and if there’s one common downfall, it’s the risk of each passage sounding detached one from the next.  Yet on The Gravity of Our Commitment, Summerfield and crew thread their vision from first note to last, no matter how extreme the music changes at every spot in between.

Seriously impressive work, exceeded by just how much fun it is to take in.