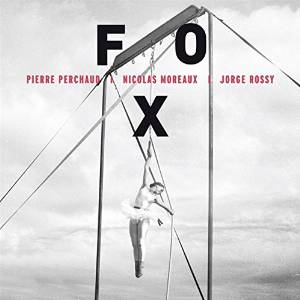 Today’s recommendation is FOX, the new one from the trio of guitarist Pierre Perchaud, bassist Nicolas Moreaux and drummer Jorge Rossy.  There’s no sense going anywhere before first emphasizing how fruitful past collaborations between Perchaud and Moreaux have been.  Moreaux’s 2013 release Fall Somewhere (one of the year’s best) and Perchaud’s Waterfalls (also one of 2013’s stronger releases), as well as their contributions to Olivier Boge’s gorgeous 2012 release Imaginary Traveler all fall into that category of must-buy recordings, and while the reasons for the success of each of these albums can be traced back to different sources, it gets to a point where, if we see combinations of musician names appearing together on new projects, that’s a damn good reason to grow optimistic.

And as with past collaborations between these artists, there is a balance between those tracks where the melody is drawn with thick lines easy to glean and those where melodic ideas are merely hinted at and it’s the strong imagery left in their wake that allows the tune to become fully realized rather than the particular geometry used for shaping.

The dreamy melodicism of “Paloma” leads out with the latter characteristic, and its execution is one that provides the shortest path to heartbreaking beauty.  “Strange Animal” charts a similar course, but its foundation is built on the slow generation of intensity.

Tracks like “Moon Palace” and the skittering title-track “Fox” run with the former approach of clearly defined trails of development.  But even in these instances, the trio provides small doses of the dreamy melodicism that other tracks are awash in.

But perhaps the album’s strongest tracks are those that incorporate both elements in (relatively) equal amounts.  Would “And I Love Her” radiate with as much emotion were it weighted more toward its crisp melodic delivery or, conversely, the shimmery twang of guitar or the gentle hush of drums whispering fervently?  Or how about the insistent murmur of “Vol de nuit” and how it straddles the line between late night ballad and urgent message?

The album ends with a slight return of the opening track with “Paloma Soñando.”  Perchaud’s voice on acoustic guitar is no less captivating than his initial sonic pictorial on electric, though where the electric was an agreeable choice for a warm hello, the acoustic is the perfect note for the equally warm goodbye.

Go get this album.

Released on the Jazz & People label.

Listen to more album tracks on the label’s Bandcamp page.

For you eMusic people, the album isn’t available for sale on the site currently, but the label does have a presence there, so it might arrive eventually.