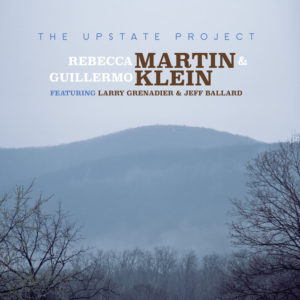 Though both had made their respective marks while on the NYC scene, it wasn’t until after Rebecca Martin and Guillermo Klein had each relocated to upstate New York that the two ultimately collaborated.  It should have happened a long time ago.  Having worked with an all-star cast of jazz musicians throughout her career, Martin has forged her own personal style of vocals and composition, sometimes situated firmly in a folk music styling, sometimes in jazz, and sometimes in that unmasked space between genres where a simple song can move mountains.  And Klein, in his unique vocalization of NYC modern jazz, the element of Argentinean folk has always been an essential component of the pianist’s work.  On The Upstate Project, those shared qualities snap right into place.  As does their approach to melody.  Like an icicle, sometimes the beauty manifests in the patient melt of individual droplets of notes and sometimes it’s when the body of song captures every facet of a sunbeam… there’s an appealing confluence of free flowing verse and song structure that keeps the attention riveted in place.

Martin adapts a few pieces from previous works, where Brad Mehldau, Kurt Rosenwinkel, Larry Grenadier, and others had their hands in the original creation.  Most notable is a reworking of Bill Frisell’s “Throughout” (renamed “Hold On” for this session), in which Martin’s lyrics amplify the original’s instrumental enchantment.  That said, it’s the pieces original to this project where this album is at its strongest.  Opening track “Just as in Spring” is a case in point, with its lullaby melody matched up with a rise-with-the-sun tempo.  It’s about as beautiful as a song gets, and also the basis for locking Martin and Klein in a recording studio for additional recordings.

Music from Kingston and Beacon, NY.

These are videos that I like: Best of Bandcamp Jazz 2017 (Part Two) Recommended: Paul Jones – “Clean”