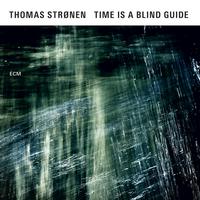 On Time is a Blind Guide, it’s the way that drummer Thomas Strønen is able to corral melodic fragments in a tight space, one defined by the rhythmic shaping, and then just send those melodic fragments bouncing around within that space that is the album’s winning characteristic.  This approach creates an effect of echoes and refraction, of endless layer upon layer until the space reaches capacity and the song reaches its natural conclusion.  And though the striking bursts of melody are likely to make the lasting impression, they thrive only because of the rhythmic environment built by Strønen and his ensemble Time is a Blind Guide… like a beautiful scene in a snow globe orb, shaken up, swirling about and drifting gently back to earth.

The album runs with two different ways of expressing the album’s approach to melodies within the confines of the rhythmic shape.

The first is exemplified best by opening track “The Stone Carriers.”  Tossed about like a ship on a raging sea, the melody adopts a motion of thrusts and ripostes and it becomes almost impossible to tell where one fragment ends and the other begins.  It results in a beauty perpetually folded over upon itself and then unfolded for one big reveal after the next.  “I Don’t Wait For Anyone” tills the soil repeatedly before really letting the melody out of the bag.  The ensemble digs into short bursts and brief patterns while letting drop little seeds of the melody.  But once they’ve finished, that’s when the bloom occurs, and that melody just stretches out, released as one long exhalation.  Title-track “Time is a Blind Guide” takes a lateral approach, with the rhythm giving the sense of a staggered march and the melody complementing it with a motion that switches between loping and coasting.

The album’s other method of display is one far sparser and where the percussion element is at the forefront and the melody is never fully formed.  It’s an approach that finely illustrates just how deftly they manipulate the environment via rhythm.  It has the effect of opening up the casing of a watch and seeing how all the gears and springs work together to represent the concept of time.  The songs “Everything Disappears [Pt. 1]” (embedded below), “Pipa” and “Everything Disappears (Ode to JT)” get to the heart of this matter.

And in a nice twist, Strønen and crew end the album with the one song where the melody is allowed to roam freely outside the bounds of the rhythmic constraints.  “Simples” is the gorgeous sigh of strings, the flickering light of piano, and the gentle patter and crash of drums and cymbals.  It’s a beautiful way to end a massively compelling and beautiful recording.

This album came out right on the cusp of my year-end cut-off for this site’s annual Best Of list.  It will definitely be receiving some consideration when it’s time to start constructing the Best of 2016.

Stream an album track on the ECM Records site.

Jazz from the Oslo, Norway scene.

These are videos that I like: Tomoko Omura – “Impressions” This Is Jazz Today: La Resistencia, Trio Da Paz, Ergo and more!