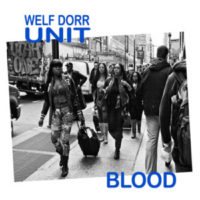 This is powerful stuff.  It’s powerful and throws a punch like it means it.  But there’s a flow to this music, a lumbering, yet effortless grace to accompany the brutality, and that is the essence of its captivation.  Welf Dorr Unit crafts its own version of avant-rock, of protest music that is no less useful to those who just want to stomp or groove for fun as it is for those who want a sonic clarion call to revolt.  There’s a little funk to fuel the fire.  There’s a bit of bop to propel the riot.  Dorr’s alto sax-bass clarinet combo and Dave Ross’s guitar switch roles between match and flame.  The bass and drums of Dmitry Ishenko and Joe Hertenstein coax the fire to greater heights and heat.  There’s nothing about this album that isn’t cool.  Blood exudes a presence that could level mountains.