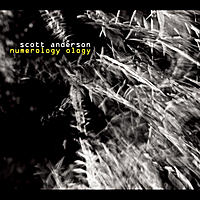 Indulging his fascination with numbers, guitarist Scott Anderson has recorded an album that is anything but formulaic.  By concocting a soup of fusion, chamber jazz, rock, and modern jazz, Anderson displays an intriguing array of differing views of his music.  The result is an album that alternates between the extremes of smoldering and smoking, with little room for anything in between.

There is a solidly fusion element to this music.  Guitar often sears notes bright and clean, aligning them with mathematical precision.  And while Anderson does keep his guitar in the thick of things, some tracks have him bringing up the rear.  “Being Nine” has piano leading the way down the trail, while the rest of the ensemble follows in its wake.  And on a track like “Short Piece #1,” while oboes and horns solo, Anderson adds some well-placed guitar accompaniment.

As mentioned previously, there’s plenty of jazz-rock fusion here, and on a track like “Severed,” it leans far more heavily on the conventions of the latter than the former.  And then there’s a track like “Ralphhead” and its pop music lilt… the dramatic build has a bit of a superficial sheen in the way it grows tension through an increase in volume and vamping, but it’s a pretty enough tune, and it lends strength as an emotional transition to subsequent track “O Waltz” with its chamber jazz enchantment, and arguably the strongest track on the album.

“Only the Trying” has a prog rock sound to it.  Oboes and horns give voice to probing notes, like searching in the dark for the light of a melody.  It’s a nice contrast to “Sita,” which develops an infectious groove out of oboe and soprano sax.

Two of the final three tracks illustrate even further the varied nature of this album.  Eighth track “All Are One” has Anderson taking a turn at piano, playing solo to start, a meditative piece that has cymbals and brushes add their voice in the back half of the tune.  Album ends with ‘Short Piece No. 2 Duolo,” a duo of guitar and English horn.

Numrerology Ology is a bit all over the place.  I often talk about an album’s cohesion as a positive quality about a particular recording, that it can act as the perfect bow to wrap a gift of music up just right.  This album doesn’t have much of that, but, really, that’s part of its charm.  In the creative process, sometimes things come to a boil, and it’s a fair expectation that all of the ideas that have been percolating in an artist’s head will come bursting out the moment the door to the recording studio opens.  It’s a scenario that often derives interesting results.  In many ways, this kind of album can act as a table of contents for all the possible stories the musician may tell down the road.

Numerology Ology gives plenty of reason to listen in to the next chapter.

Note:  Oboists performing on this album also have their own outfit, the Threeds Oboe Trio.

The album is Self-Produced.  Jazz from the Brooklyn scene.

You can stream, and purchase, the album on the artist’s Bandcamp page.