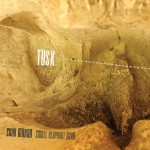 Interesting recording from guitarist Sean Moran, his first as session leader.  An album with its own personal geometry.  Tusk is music that approaches from unusual angles, and departs the same way.  Moran’s use of nylon string guitars gives the music an element that shifts things to something of a parallel universe of similar modern jazz recordings.

That the source material influences span across different genres only adds to the intrigue surrounding this music.  There is a chamber jazz ambiance to the recording, but that seems more as the inevitable result of the components Moran puts in play than any concrete plan going in.

This is music of perpetual changes in direction performed with the fluidity of leaves caught in the thrall of small wind flurries.  Though often pretty at times, the music is heavily indebted to its percussive qualities, and melodies behave as envious of their rhythmic counterparts, and skitter away in a formless reenactment.  Melodies are far more often felt than seen, and when seen, it’s typically only in glimpses.

Opening track “Elliptical” presents itself as if coming strong with a melody, but in the act of unfolding, it becomes increasingly centered around a marching rhythm… a transition that creates a sense of deconstruction even as it becomes, in a way, more rigid.  The album presents other, similar incongruities to keep the ear entranced.

Some tracks aspire to a haunting presence, like “To the Edge of the World,” which offers sounds as unseen shapes looming just outside the periphery.  Others, though, offer a distant warmth… “Moon Reflected” rides the crest of McGinnis’s clarinet, a landmark of austere beauty that each of the other quintet members circle about and share in, like campers intermittently adding wood to the fire.  And “The Camel” has a folksy charm, leading out with Moran’s rustic sound on guitar, and accentuated by Eisenstadt on drums.

“Monkeytown” gets the pulse inching upward, buoyed primarily by Dingman’s vibes, and “Ten Mirrors” is a maelstrom of sound with Eisenstadt’s drums in midst of it all.  But for the most part, this is an album more acclimated to a hazy drift.

The footsteps of Radding’s bass on “Dream of Water” sends notes from McGinnis’s clarinet scattering in all directions. “Circle One, Two” is another tune that appears without structure, and is best to simply follow the path laid out by Dingman’s marvelous vibe-work.

An album where the listener follows the footsteps of percussion and not the path laid out by melody, yet still takes on an ethereal drift, and the incongruities of this unconventional album are the ingredients of its strange geometry.  Something a little bit different that goes a long way.

Released on the NCM East label.

You can stream the album, and purchase it, on the artist’s Bandcamp page.

Worth mentioning that Moran is a member of the Four Bags outfit… a group I’ve liked for some time now, but other than a quick mention right when this site first began, haven’t really talked about them before.  Worth looking into.  Here’s a link to their Bandcamp page.