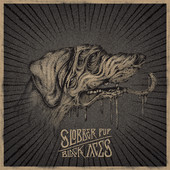 The music of Black Aces will punish you.  And that’s okay, because some of you probably deserve to be punished.  Hell, some of you even like the punishment.  Slobber Pup is the quartet of Jamie Saft on organ & keyboard, Joe Morris on guitar, Trevor Dunn on bass, and Balazs Pandi on drums.  Nothing here is out of sorts with what these musicians have brought to other recordings, but that still doesn’t make the results of this collaboration any less startling or overwhelming to the senses.

Intense waves of music, a sonic bombardment.  Opening track “Accuser” opens with a pounding tempo, cut through the center by Morris’s guitar.  But despite the furious opening, both Dunn and Pandi somehow raise the stakes and take the tempo to a higher level of volatile motion.  Sometimes, like on “Suffrage,” the bursts of Saft’s organ break through and provide a soulfulness that’s almost heavenly.  And then there is a track like “Taint of Satan” in which Saft’s organ permeates the entire tune, and through sheer force of will, causes the music to hover inches from the ground despite its intense rhythmic weight.

Songs differ in focus and compression.  Album opener “Accuser,” with all of its rage, dispenses its fury with a telescopic unison.  Whereas tracks like “Basalt” and “Black Aces” are freer with their structure, looser with the connectedness of interplay.

Challenging, yes, but I think some of you are up for the challenge.

A portions of this review was originally used in my Jazz Picks weekly article for eMusic, so here’s some language protecting their rights to that reprinted material as the one to hire me to write about new jazz arrivals to their site…