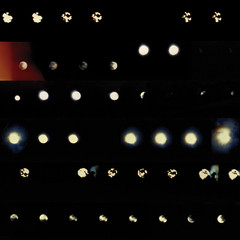 The music on Mo7it Al-Mo7it probably shouldn’t be here for you to listen to.  And unless I saw a performance live, I probably shouldn’t be writing about it.  The Jerusalem In My Heart ensemble was founded by Radwan Ghazi Moumneh, a Lebanese ex-pat living in Quebec, and includes line-ups that range from two to thirty-five members, a disparate array of instruments and backgrounds, with the raison d’etre of giving multi-media performances that embrace the best qualities of experimentalism.  And it’s meant to be seen live.

Mo7it Al-Mo7it is the first effort to offer one of their projects in a recorded audio format.  You get a CD or a download or a vinyl LP.  You don’t get the film or the lights or the interactions between musicians or the interactions between musicians and audience.  You don’t get the show.  You don’t get the intended experience.  And that could be problematic.  Isolate one element from a creative vision, and it’s a completely different construct.  The ingredients fuse to create something greater than their individual flavors, so without one, it’s just not the same anymore.  All gone.

It was worth it.

A fusion of contemporary Arabic and electronic music goodness, JIMH offers a sound recording that is compelling for its adventurism and welcoming with an earthy folk music personality.  It’s definitely something different.

Of exceptional beauty is the use of the acoustic buzuk.  Whether matched with harp and sound of birds chirping or set against chant and enfolded in electronics, it adds an immutable serenity that takes the music up to lofty heights.  On “3andalib al-furat (Nightingale of the Euphrates),” the peaceful seaside languor counteracts the abrupt chanting drama and synths of album opener “Koll lil-mali7ati fi al-khimar al-aswadi (Speak of the Woman in the Black Robe).”  Whereas on consecutive tracks “Ya dam3et el-ein 3 (Oh Tear of the Eye 3)” and “Ko7l el-ein, 3oumian el-ein (Eyeliner of the Eye, Blindness of the Eye),” the buzuk proves it’s just as able to switch from solo expressions of serenity to active amicable conversations with synthesizers and electronic effects.  At first, the strings and the electronics have their separate voices, but then the voices begin speaking over one another until they achieve a state of near unison… a near-drone of fine textures and nuance that adapts to changes in time and intensity.

The duo tracks “Yudaghdegh al-ra3ey wala al-ghanam (He titillates the shepherd, but not the sheep…)” and “3anzah jarbanah (Sick, Diseased Goat)” feature song and chant set against a rainstorm of keyboard effects.  In the first of these album tracks, Moumneh’s voice is a lilting reverb, a velvet harmonization with synths, and reveals a delicate soulfulness.  The theme continues with the subsequent track, but with a harsher exterior presented.  And though it’s more aggressive in nature, when voice and synths become one, a plaintive cry of the blues comes through loud and clear.

The album ends with a similar theme to how it began.  But this time around, it brings the album’s two primary characteristics together:  The vocals/synths dramatic combo and the charming serenity of the strings.  At first, the two sides enter into a conversation with delineated sections, but as the song progresses, so does their distance, until two becomes one, and the album comes to a graceful end.

A very cool album.  And though separated from the full scope of the project, it would have been a loss for this music to be unavailable in an audio format.

Released in 2013, on the Constellation Records label.

Malena Szlam Salazar does the artwork, and also the visual aspects of the live performance.

The album becomes available on March 19th, so I’ll add some extra retail links in a few days.

By davesumner • Beyond Jazz Reviews • 0 • Tags: Something Different