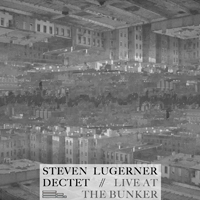 Following the release of his duo debut recordings Narratives and These Are the Words, and in between two separate touring stints, multi-reedist Steven Lugerner felt a need to work on a new project in that period of down time.  Deciding to expand on the personnel and arrangements from the line-ups he had been working with, he ended up with a dectet and a set of compositions to match.  Following a series of rehearsals, they went into the recording studio for one session… which became Live at the Bunker.

I first became familiar with Lugerner right around the time he first released his two debut albums.  Both received mention in my Best of 2011 run-down, and both still deserve it.  Two different albums, a septet and a quartet session, each with different personnel, and each having different sounds (Narratives a storytelling demeanor and These Are the Words an argumentative one), and both articulating impressive creative visions… particularly astonishing in light of the debut status.  And Lugerner has a new release out soon, For We Have Heard, so I didn’t want this particular release to perhaps get lost in the crowd.  No overdubs or editing, it’s a single performance that serves as another photograph of the development of Lugerner’s sound and vision.  That, and it’s just a fascinating little album.

Of immediate impact is the inclusion of banjo on this recording, and the doubling up with guitar.  Opening track “Bells & Whistles” offers up an enticing juxtaposition between the quaint rustic chatter of banjo and the assertive voices of saxes and brass, sections that quaver like sunlight on a calm breeze and others that skitter happily along.  Even those times when saxes and brass join forces, the expressions are languorous and bewitching, doing nothing to dispel the tune’s congenial ambiance.

But that doesn’t last throughout.  “Cardboard” takes a few departures into different territories.  What starts out a peaceful tune descends into avant-garde territory.  The clash of sounds does a remarkable job of mimicking a forest thick with the sound of wild birds… an effect that instills a meditative calm at a dissonant moment.  Wurlitzer offers a shimmery response to the combined roar of saxophones.  Eventually the tune takes another turn, this time into more conventional territory, before eventually ending up from where it began.

“Maaria” opens with the howl of saxophones and the rattle of banjo across the floor.  A haunting tune, though not necessarily threatening.  It slowly morphs into a lullaby that dreams of becoming a ballad.

“Spectrophobia” hammers the melody down in place, then slowly taps it gently throughout the remainder of the song.  Light on its feet and twisting up and quickly unwinding, it gives the sense of motion standing in place, and shares a neighborhood with the forward-thinking music of Todd Sickafoose’s Tiny Resistors.

The album ends with “Alondra,” a composition from Lugerner’s Narratives.  Both that version and the one here are enchanting and warm, but the original was often cloaked in dim moonlight and the current rendition is content standing in sunlight.  Lugerner gets the dectet to warp the notes and scar the edges, and the song’s unpolished veneer brings out fascinating details from the composition not evident in the original.

Available only as a digital release on Lugerner’s Bandcamp page.

And here’s a LINK to my recap of Lugerner’s Narratives.  It’s not too extensive; I was just getting this site up and running, and trying to give a rundown of the best stuff that 2011 had to offer.  I’m also kind of nervous to re-read (or point out) any of my writing from back then, but I’m linking to it anyways.