The Round-up: I was becoming a fixture 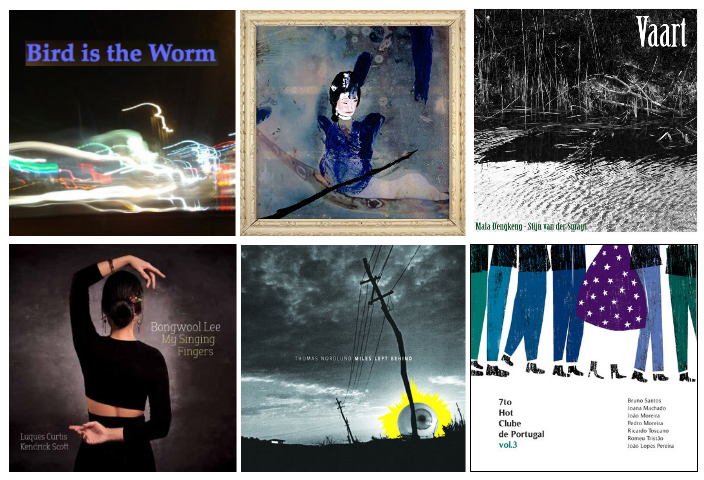 This is more a collection of photos than songs, where the sharp imagery, frozen in time, resonates far longer than the brief moments captured on film.  Most of the album’s ten tracks are quick and to the point, as if simply introducing an idea and letting the listener flesh it out on their own time.  Individually, this works well for each piece, but taken as a whole and in the context of the flow of one track to the next, it’s pretty damn thrilling.  Barely has one reaction hit its peak before you’re put in the position of having to absorb the next.  There’s something special about an album that forces you to stay on your toes.  Your Collective is saxophonist Isaiah Barr, drummer Austin Williamson, upright bassist Walter Stinson, electric bassist Spencer Murphy, plus Roy Nathanson guesting on saxophone.  Music from NYC.

Here’s your music for a peaceful Sunday morning, when all you want to do is bring tranquility to your life, and, perhaps, nurse away your Saturday night hangover.  The duo of violinist Mala Dengkeng and pianist Stijn van der Smagt cycle through a pattern of soothing melody dissipates into a warm blanket of harmony.  The only complaint I have about this recording is that there’s only five tracks.  They could have tripled this album’s duration and it still wouldn’t have been enough.  Music from Delft, Netherlands.

Here’s a video for the title-track.  It has everything I could want from a video:  Trains, boats, planes, seagulls, moody landscapes accompanied by moody music.

Sometimes you just want to sit back with a piano trio recording that plays it nice and straight, and patiently dives into a melody to explore every inch.  The debut from Bongwool Lee will definitely fit that need.  The pianist straddles that middle ground where old-school jazz bleeds into the modern post-bop, and so the music is always plenty lively even when it grows increasingly contemplative.  Bassist Luques Curtis and drummer Kendrick Scott are attached to the hip with Lee throughout, and that grand unity is why the music possesses a seriously appealing flow.  Music from NYC.

Miles Left Behind has got an easy-to-like personality to it.  A modern jazz recording with healthy doses of blues and country, Thomas Nordlund modulates the heat level along the spectrum of campfire warmth to raging bonfire, but keeps closely to one extreme or the other.  Ben Abrahamson on banjo is a nice touch, with bassist Doan Roessler and drummer Zach Schmidt rounding out the quartet.  The music is stronger when Nordlund’s guitar behaves as the train tracks guiding a tune rather than the locomotive driving it, but I tend to be more particular when it comes to jazz guitar, so that could be written off strictly to personal tastes.  Nordlund ends the album with a magnificent rendition of Nils Frahm’s “Si,” which will be addressed in an upcoming column.  Music from Minneapolis, MN.

Breezy tempos and melodies thick as a moonbeam at midnight are the signifying marks of this enjoyable septet session from guitarist Bruno Santos, vocalist Joana Machado, trumpeter João Moreira, saxophonists Pedro Moreira & Ricardo Toscano, bassist Romeu Tristão and drummer João Lopes Pereira.  While the gravitational pull is likely stronger towards those pieces that ratchet up the electricity, the ensemble is at their strongest when thoughtfully expressing a melody and nurturing it patiently to a fuller bloom.  Music from Lisbon, Portugal.