The Round-up: Between steel and sky 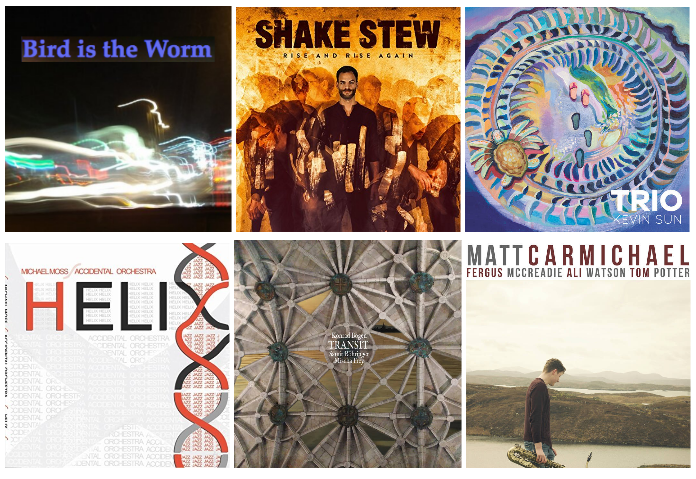 Shake Stew is the congregation and their new album Rise and Rise Again is a testament to the choice of expressing spirituality via euphoric motion or solemn contemplation.  Ultimately, the septet take both routes, and in both instances, their church bursts with a celebration of life.  Skittering grooves and thick melodies feed off the energy of one another, a playfulness of motion like the dance between shadow and sunlight.  Tenor saxophonist Shabaka Hutchings sits in for a couple of tracks, and it’s a shame it’s just for two, because he is a perfect fit for this band on this album.  Music from Vienna, Austria.

There’s an undercurrent of aggression on the newest from Kevin Sun, and it flows through the music no differently when it veers into avant-garde territory as it does when the trio is simply laying down a pretty melody.  Joined by bassist Water Stinson and drummer Matt Honor, the tenor saxophonist rolls out an impressive display of expressionism, where the method of delivery is what binds the album together instead of the cohesion of sound.  That’s pretty cool, and it’s why the ever-changing landscape of Trio feels like it’s keeping to a predetermined path.  Music from Brooklyn, NY.

What’s most astounding about this fascinating free jazz release is how Michael Moss is able to spotlight individual rivulets of melody in the dense wave of his big band harmonics.  Violinist Jason Kao Hwang, trombonist Steve Swell and tabla player Badal Roy are a few of the familiar names in Moss’s Accidental Orchestra, and symbolic of the sonic diversity that powers Helix.  There are countless surges intensity, and how they pull apart at the seams of a piece and then suddenly coalesce into a singular vision is just one of the many fascinating qualities offered up.  Another is Michael Lytle dishing out fire on bass clarinet.  Don’t be surprised if this album makes some noise in year-end lists.  Music from NYC.

The trio of pianist Konrad Bogen, bassist Mischa Frey and drummer Samir Böhringer develop a seriously friendly chatter on their latest, and what makes it so compelling is how that level engagement maintains its electrical charge regardless of the tone of a particular piece.  And so, the contemplative tunes possess the same magnetism and friendly demeanor as do those tunes that move with a lively hop and bounce.  As they did on their previous release, United, the trio takes a Kendrick Lamar tune for a spin, and with equally successful results.  Definitely musicians to keep on your radar.  Music from Berlin, Germany.

A promising debut from tenor saxophonist Matt Carmichael.  A calm intensity and casual delivery makes for an appealing combination.  That, in addition to some well crafted melodies, is the source of this EP’s charisma.  Though I suppose it shouldn’t be overlooked how each of these four pieces demonstrate that the quartet understands the value of making a strong opening statement.  Joining Carmichael are pianist Fergus McCreadie, bassist Ali Watson and drummer Tom Potter.  Music from Glasgow, Scotland.