Thumbscrew at Big Ears Festival 2019: This is really happening

I adore Thumbscrew‘s 2018 double release Ours and Theirs.  It earned this site’s Best of 2018 #4 slot, and garnered a mention in my Best Bandcamp Jazz in 2018 column.  The trio of guitarist Mary Halvorson, bassist Michael Formanek and drummer Tomas Fujiwara possess a cryptic sound, something that incorporates each musician’s distinct individual form of expression that, also, somehow, almost unexpectedly, meshes perfectly into a single, crisp perspective.  And it’s an equation whose success proves out whether they’re composing their own odd sonic machinations or covering works from jazz legends of a wayback era.  It’s quite magical.

And seeing it happen live…?  It was surreal. 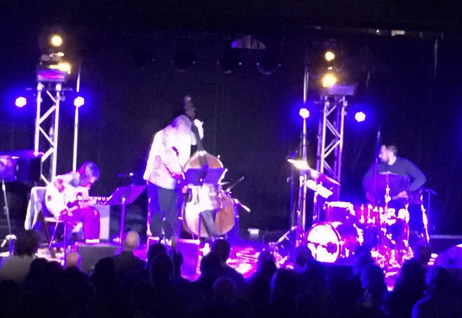 Thumbscrew’s Saturday afternoon show at The Standard was pretty straight-forward.  The trio nested themselves on the stage behind their music stands and just played along to whatever was written down in front of them.  Held up to the electricity flowing between musicians and audience from the Fire! trio on that same stage the night before, this performance was tame by comparison.  But just seeing the trio recreate the music of Ours and Theirs in the moment was like peeking behind the face of the universe at the clockwork mechanisms within.  It was riveting.  There is something almost alien about Thumbscrew’s sound, even when it radiates an unmissable familiarity, that to witness the human beings responsible for it… and to see proof that, yes, it’s three beating hearts and three calculating minds that set that strange and alluring music in motion, it hit me with the sensation of The Big Reveal. 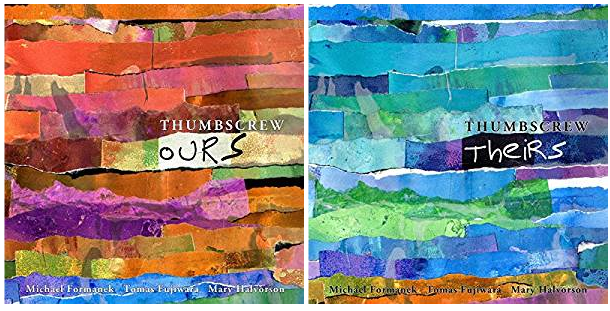 Some or all of that might not make any sense.  Obviously I never doubted the music of Ours and Theirs was created by human beings.  But so much of our interface with the music we connect with on a daily basis is through the impersonal mediums of digital files and CDs and vinyl, and it’s not difficult to lose sight of the humanity behind it all.  This sort of detachment is further compounded by the personalization triggered by and in each of us, as we attach meaning and imagery and consequence to everything we hear as part of the process of making the music a part of who we are.  It’s why seeing this music live is so invaluable.  Because on top of the wonderful surprises and fascinating deviations that inevitably result from a live performance, and the sensory mainline of experiencing the music live and feeling it as much as hearing it… there’s also the communal nature of the concert, of reconnecting the music to the artists creating it while simultaneously tethering that connection to all of the people in the audience doing the exact same thing at the exact same time.

And we take that back home with us.  That sense of community and connection are revived when next listen to that music again on our stereos, alone and in the privacy of our homes, but not quite the solitary act it once was.

The music of Thumbscrew is no less strange and enchanting than when first I heard it, but having seen and heard it in Knoxville at the Big Ears Festival 2019, that magic resonates on a much more human level than it once did.

Be sure to check out Thumbscrew’s excellent 2018 double release Ours and Theirs, released on Cuneiform Records.

The Thumbscrew trio of guitarist Mary Halvorson, drummer Tomas Fujiwara, and double bassist Michael Formanek had two simultaneous releases in 2018, but for all intents and purposes, they should be viewed as a single recording.  Ours consists solely of compositions from the trio members, while Theirs features compositions by jazz giants Wayne Shorter, Herbie Nichols, Jimmy Rowles, and Misha Mengelberg.  However, Theirs is Ours, too, because these three musicians, each with their own striking personal voice, bring that same individuality as a trio to that music from a past jazz age and make it sound as brand new as tomorrow’s sunrise.  The language of jazz is passed on down through the generations, and in that way each successive generation is shaped by the environment they are born to, they give new shape to the music language they’ve inherited.  Thumbscrew is a priceless example of how old and new can sound nothing alike and yet still exist in a state of unity like one slow exhalation of the most enchanting sound ever.  Jazz never dies.  It evolves.  And then there are those instances, like Theirs and Ours, when sometimes, instead, it is an act of reincarnation.  These are the tiny miracles that music can convey upon our lives.  Be sure to celebrate them.