The Bad Plus are in Lexington and you should be too 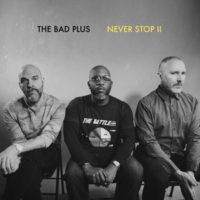 This Sunday, December 9th, The Bad Plus are making a tour stop in Lexington.  They’re supporting their new album Never Stop II, but the series of shows also has the benefit of helping the trio gel.  When drummer Dave King, bassist Reid Anderson and pianist Orrin Evans perform Sunday evening at the Lexington Children’s Theatre, it will be as a new working unit.  It’s kind of a big deal.  Even in the context of jazz, where musicians must learn to collaborate with changing personnel while still taking their initial baby steps with their instrument, the fact is trio members of The Bad Plus have been together for decades.  So, with Orrin Evans having replacing founding member Ethan Iverson, there’s gonna be an acclimation period, and a tour is the kind of thing to help that along right quick.  The upside to all that is it’s the kind of thing that can lead to some fun surprises during the performance.

Another upside is that we get to see Orrin Evans perform live.  I’ve lost count of the number of times I’ve recommended his music on this site (and my various other platforms), and so I’m personally thrilled to finally get to hear him in person.  Concerts or CDs, I don’t favor one over the other.  I am just as happy kicking back at home listening to music as I am going to a venue to hear it live, but they can lead to very different connections with the music.  I get to round out that experience on Sunday.

I’m also excited to get to see Dave King behind the drum set again.  Kevin Coultas, former Music Director at WXOX-FM (and who now has his own blog) told me years ago that I should go see The Bad Plus in concert for no other reason than to watch Dave King in action.  When I saw the trio perform as part of a larger ensemble at the Chicago Jazz Festival several years ago, I finally understood what Kevin was alluding to.  Some musicians react physically to the release of music, and some more than others.  For the most part, there’s nothing particularly compelling about this.  But there are rare instances when a musician’s physical reaction perfectly captures the poetry of the moment, and the intangible is given corporeal form.  During that CJF performance, Dave King was the living embodiment of that music.  Not saying that’s gonna happen on Sunday.  Just throwing that out there.

The Bad Plus are one of those bands who have established some genuine crossover appeal.  Your friend who is mostly into indie-rock and post-punk, but keeps her ear open to other kinds of music?  The Bad Plus will be one of the jazz acts on her radar.  And for good reason, the Bad Plus were one of a handful of acts who were offering up a concrete vision of where they thought the modern jazz scene could go, and doing it at a time when modern jazz had hit a certain lull.  That this sound incorporated rock standards and current pop hits only amplified the trio’s reach to non-jazz ears.

Even though Orrin Evans is The Bad Plus’s new pianist, he’s not new to the scene. It’s weird to learn that Downbeat just voted him this year as the winner of the Rising Star category, because as readers of this site know, Evans’ has been recording excellent music for years.  Dude’s star been risen.  He’s got close to thirty albums with his stamp on it.  He’s been releasing stuff lately on the excellent Smoke Sessions Records label, with both his big band and smaller ensembles.  What do I appreciate most about this guy’s music?  That even when his music gets further away from a traditional jazz sound it always keeps a close proximity to the blues.  And when his music plants itself dead center in jazz territory, well, the blues is there, too.

As mentioned previously, they’re touring in support of their “debut” as a new trio.  The title Never Stop II is a reference to their sole album that is comprised by only original material, no covers.  That’s the case here, too.  And while some of their covers of pop music were pretty damn cool, honestly, I’d rather hear the sounds that have been bubbling up in their heads all these years.  And with Evans now in the mix, it seems like an opportune time get all that out there.

Never Stop II isn’t a huge departure from previous The Bad Plus recordings, so fans of what was aren’t going to be let down by what is.  That said, the Evans composition “Boffadem” provides a nifty vision of one potential new direction the trio could embark upon.

Their new album is available at Amazon.

This show is part of the Origins Jazz Series, which has been bringing some intriguing shows to the Lexington scene.

Who:  The Bad Plus

Here’s a video from a recent performance in Stockholm.  It’s shaky but in the spirit.