The Music of Kate Olson 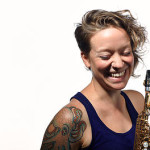 Despite a very heavy listening schedule, I still occasionally dedicate an evening to just wandering the halls of the internet on a blind journey, just to see what music comes up when I enter certain keywords on sites like Bandcamp and Soundcloud (where I’m able to actually hear the music once I happen upon it).  Due to his strong influence on the Pacific Northwest music scene, the search term “Wayne Horvitz” comes up with all kinds of nifty results.  One of them is Seattle-based saxophonist Kate Olson.  I found some good stuff.  There’s a bunch of different projects with her handprints on them, and I’m gonna talk about some of them here today. 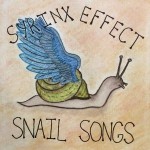 Syrinx Effect is a duo collaboration of Kate Olson on soprano sax and Naomi Siegel on trombone.  Snail Songs is dreaming music… it just happens to occasionally chatter and fling about in its sleep.  “Moon or Crab” dreams at night of being a serene ambient drone, but lovely melodic lines, perpetually intertwining and unraveling, inspire more liveliness than an ambient hush can contain.

This trend continues on “Another Day of Rain,” as the song shakes off the sleepiness of the previous track and jumps out of bed all bright-eyed and ready to tackle the day ahead.  The same pattern of wind-unravel continues here, but with more exuberance and occasionally broken up by lovely, long pauses of harmonies exhaled slowly in contrast to the song’s predominant boisterousness.

“Respired By” returns to a state of tranquility, and the gentle susurrant harmonies accentuate that state of peace even at their peak.  “Flight Case” shows its playful side.  The sense is of many bodies in motion bouncing off one another in a very tight space.  Sometimes there’s no direction to go but up.

Cagematch – Missing the End All 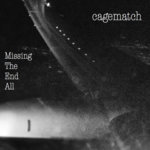 There’s an alluring motion to the music of the Cagematch trio, a transcendent aspect that informs every bit of the sound they kick out.  The surging tempo matches wits with spasmodic melodies and electronic effects that go from a spark to a flame without warning.  But even though so much of this music’s qualities suggest an uncontained volatility, it’s something far more embraceable than that.  For all their furious motion, the melodic fragments lose not a bit of their captivating beauty, and those tempos, quite often they insinuate a dancing motion, as if the percussionist is daydreaming of a waltz as he speeds the trio forward.  This fuzziness of form and intent is endearingly reminiscent of John Lurie’s Lounge Lizards, where the music’s feel counts for more than how it springs from a thesis statement and outline of events.

The two-part “Orb Weaver” is the best example of the trio’s seemingly contradictory motives/results.  The music transforms from a soundtrack for a celebration into a cry to attack… and then, interestingly, settles into a contemplative eye-of-the-storm peacefulness before surging back up into a wall of intensity and crashing the whole thing down.

The polar opposites “The Snow Leopard” and “Beneath the Pony” define the extremes of this trio’s wheelhouse.  The former has a dreamy presence and is delivered like a lullaby while the latter pours gasoline over a melody and lights it on fire.

The album ends back in the trio’s sweet spot of melody and motion with “Phonological Loop.”  Some twirling motion from sax, a personable twang from guitar, and nice conversational chatter from percussion that spurs the discussion to ever more lively imagery and activity.

Only Trio – Only Trio 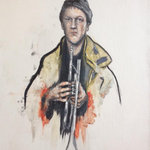 There’s an appealing mix of personable warmth and solitary contemplation from this collaboration of the Only Trio of soprano saxophonist Kate Olson, trumpeter Steve O’Brien, trombonist Jacob Herring, and guest drummer Joe Eck.  Tripling up on the woodwinds bring up all kinds of nifty harmonic opportunities, which they take advantage of in some very well-placed moments.  Their best treatment of the melodies are when they yawn them out woozily.  The crosshatch of old-school and new-school sounds is best punctuated by the occasional flurries and surges from drummer Eck at the exact moments that the trio of wind instruments is lovingly rolling out a section that beats with the heart of a ballad.  This is music for a tranquil weekend morning, when you want something with a little bit of kick but also something that respects the solemn occasion of a fresh sunrise. 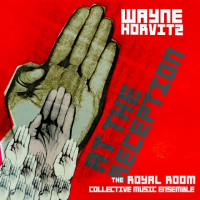 Aside from a nice showcase of the rich talent pool of the Pacific Northwest jazz scene, the line-up for composer Wayne Horvitz‘s large ensemble recording shows how the collaborations between the musicians doesn’t end at the studio door of one particular session… many of the musicians Kate Olson collaborates with on the other projects highlighted in this column also make an appearance on At the Reception.  Originally an innovator on the NYC 1980s downtown scene, Horvitz relocated to the Northwest, and the influence from his diverse talents at mixing old and new school jazz, folk, chamber, electronica and rock is evident in many of the recordings currently getting released from a new generation of jazz musicians.

This session is nicely straight-ahead, offering up a full sound to complement Horvitz’s sharp lyricism.  I’ll be running down the particulars of this recording in a separate Wayne Horvitz themed column, but I wanted to give it a mention here just to further illustrate the expanse of Olson’s creative wingspan.  Also, it’s a great recording.  Go pick it up.

Released in 2014 on Songlines Recordings.

Listen to other album tracks on the label’s Soundcloud page. 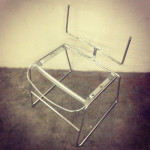 This duo collaboration between Kate Olson and Patrick Neill Gundran (who seems to go by the name Uneasy Chairs) is a one-two punch of improvisation and studio manipulation.  After recording their duo improvisation at Seattle’s Gallery 1412, Gundran took it back home and began editing, reforming, rearranging and reshaping the music into its current form.  There’s plenty of dissonance from the effects, both live and in-studio, which is why it’s pretty captivating when a melodic passage enters the frame.  It’s plenty likable, and it’s the kind of experiment that’s just plain interesting to hear the results, regardless of whether you actually like the music or not.  Go check it out.  It’s offered as a free download on the Uneasy Chairs site (link below the audio).

This Self-Produced album was released in 2015.

And it’s not all strange and curious music from Olson.  Her KO Ensemble is straight-ahead jazz, a fastball right over the heart of the plate, and it’s just as terrific as her more unconventional projects.  What’s especially gratifying about this project is that it provides her the space to reveal the extent of her lyricism and to bring it to full bloom.  The melodic fragments she spins and weaves into the framework of her jazz-on-the-fringes music certainly possesses an evocative beauty, but to hear her exhale a melody in a more familiar environment really allows her talent to shine.

If the music embedded below originates from her 2015 birthday show, then this would be the personnel:  Kate Olson (soprano sax), Robby Beasley (trumpet), Naomi Siegel (trombone), Simon Henneman (guitar), Geoff Harper (bass) and Eric Eagle (drums).

Listen to more of this music at the artist’s Soundcloud page (LINK).

These are videos that I like: Sam Sadigursky – “String of Pearls” Recommended: Stefan Bracaval – “Insight Inside”