The Round-up: The end to obstacles 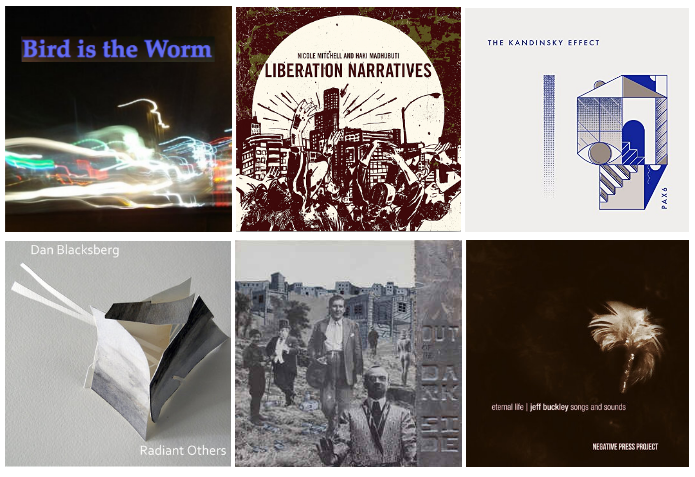 This commission from the Jazz Institute of Chicago reunites flautist Nicole Mitchell with her mentor, poet Haki Madhubuti.  With Madhubuti’s poetry as the centerpiece, the music possesses a directness that does nothing to blunt the impact of the message even as it’s bolstered by the nuance of Mitchell’s compositions.  Originally a live performance project, Mitchell shifted things around for the project’s transformation into the recorded medium.  That it all went down just days after the Presidential election is a timely reminder that the messages from the past can still point to the path ahead while simultaneously engaging the problems of today.  Mitchell’s ensemble includes vocalist Ugochi, trumpeter Pharez Whitted, cellist Tomeka Reid, violinist Rene Baker, pianist Miguel de la Cerna, bassist Harrison Bankhead and drummer Tomas Fujiwara.  Music from Chicago.

The Kandinsky Effect are a candle.  Rhythmically, they flicker and dance and kick out some heat.  Meanwhile, the melody slowly melts and bleeds through the music, and always at the behest of rhythmic forces.  There’s also electronics and effects.  The trio of saxophonist Warren Walker, bassist Gael Petrina and drummer Caleb Dolister don’t hold back on them, either.  But on their new release Pax 6, the electronics only add texture… the color of the candle, in this metaphor.  Ultimately, it comes down to the percussive nature of this trio, and the ways they modulate the tempo to shape the songs that is the driving force of this music.  Music from Paris.

So, Dan Blacksberg specializes in klezmer trombone, which you might think is some sort of clever PR hook until you hear the music and recognize how heartfelt it is.  A mix of originals and traditional pieces, trombonist Blacksberg and guitarist Nick Millevoi (plus some guest keyboards from Christopher McDonald) range from jaunty strolls to more intense reveries to gentle harmonic susurrations.  It’s more than a bit intriguing, and when you discover that both musicians have collaborated with John Zorn and Tzadik Records, it all comes off as quite a bit logical, too.  Music from Philadelphia.

The winning quality of Out Of the Dark Side is how cohesive melodies suddenly emerge out of the hazy mist of daydream imagery.  There’s a sense for much of the album that the quintet of bassist Kaare Bjerke, lap steel guitarist Buster Jensen, guitarist Alex Jønsson, saxophonist Svend Dam Meinild and drummer Emil Mossing Thorenfeldt are more interested in generating an atmosphere than diagramming songs.  But that’s not to say that they won’t utilize structure as building blocks to their ultimate grand design, and because of their economical use of those tools, their effect makes that much more of an impression.  Music from Copenhagen.

So, this is a tricky album for me to write about.  The Negative Press Project adapted the music of Jeff Buckley for jazz ensemble.  The thing of it is, I only ever half-liked Buckley’s music.  Sometimes one of his songs would come together in a rather beautiful way, but more often than not, he’d develop a melody to places that I found a bit melodramatic.  But I like what this ensemble does with Buckley’s tunes.  It’s a nice balance between the original’s song structure and the desire of the ensemble to roam free and explore.  And like the originals, there are some moments on Eternal Life: Jeff Buckley Songs and Sounds that come together quite beautifully, and, also, like the originals, there are moments where the intensity could’ve maybe had its power cut a bit sooner.  I have no idea if actual fans of Jeff Buckley’s music will enjoy this album.  I do believe that going in blind about the music’s source, and thus judged on its own merits, plenty of people will, in fact, find plenty to like.  They put out enough material to fill two discs, which seems kind of excessive to me, but then again, if they were adapting the Bowie songbook, I might be asking, “Why no third disc?”  Music from Oakland, CA.