The Round-up: The unseen was just us all along 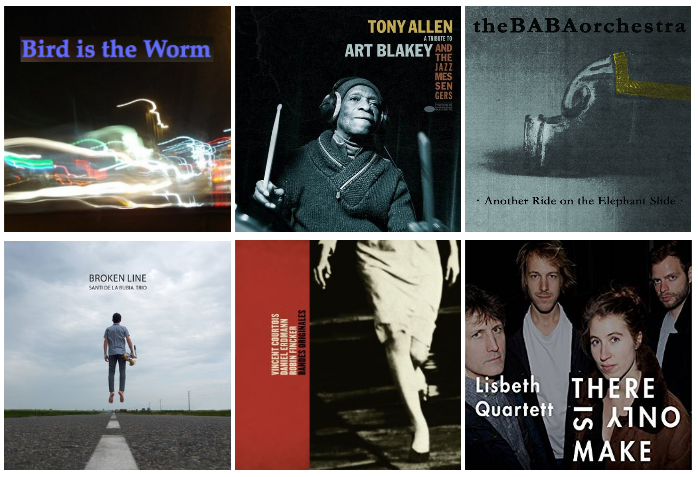 The collaboration between drummer Tony Allen and Blue Note Records is resulting in all kinds of wonderfulness.  First up is this four-track EP tribute to the music of Art Blakey & the Jazz Messengers.  Renditions of “Moanin’, “Night in Tunisia,” “Politely” and “Drum Thunder Suite” give Allen all the material he needs to draw the parallels between his own afro-beat background and the African influence inherent in a creative arc of his counterpart’s career.  It’s stunning how the differences emerge from a foundation of the familiar.  “Politely” is transformed into a smouldering beauty, almost moody in how the melody is delivered.  “Moanin'” becomes the theme for a spy thriller.  “Night in Tunisia” is a get-up-and-dance tune.  “Drum Thunder Suite” relinquishes some of the original’s locomotion to put a little bounce in its step.  And as thrilling as the inspired changes are, what it all comes down to is that this is a very fun album.  By the way, Allen’s other Blue Note release is The Source.  That write-up posts on Tuesday, 11/5/17.  Music from Paris, France.

theBABAorchestra – Another Ride On the Elephant Slide (Thirsty Owl Records)

17-piece theBABAorchestra pokes around in different genres, and sculpts forms of expression that aren’t ever going to be considered a conventional medium.  It’s especially enjoyable when they harness the strength of their numbers and stir up a storm.  The harmonic force this experimental big band generates is pretty thrilling all on its own, but when it transitions into a passage of delicate melodicism on “t.i.m.e. [the immediate measure (of) energy],” it becomes clear that the lyrical poignancy of the ensemble shouldn’t get lost in the joy of the intensity.  Music from L.A.

A solid straight-ahead session from the trio of tenor saxophonist Santi de la Rubia, double bassist Marc Cuevas and drummer Roger Gutiérrez.  Some new- and old-school bop, but the trio situates itself in a place where the shift between eras doesn’t require a sea change in expressionism.  The trio isn’t so much about dialog between the musicians as building a unified flow of conversation.  This leads to some nifty changes in speed and articulation.  For instance, the contrast of the combustible “MT” and how the melody grows delicate just as the tempo leaps forward.  Plenty here to like.  Music from the Barcelona scene.

This captivating session from the trio of Vincent Courtois, Daniel Erdmann and Robin Fincker isn’t looking to make a soundtrack any more than they’re out to cover one.  Instead, they reminisce on favorite movies and channel it into their own vision.  But it’s not an alternate soundtrack… it’s a pronouncement on the power of lasting images and how they shape the sounds of today.  The instrumentation of a cello and two saxophones is a combination that leads to all kinds of strangely upbeat and deeply contemplative passages.  Music from Paris, France.

Lisbeth Quartett – There Is Only Make (Traumton)

It’s always a good idea to stay in touch with what Charlotte Greve is up to.  The saxophonist’s latest is a nice straight-ahead session that allows her to highlight both her innate lyricism and strong compositional skills.  This quartet session (which includes a guest appearance by saxophonist Christian Weidner) mixes some shorter improvisations between the longer pieces, with the former being more disjointed and formless than the latter… sort of the alternating scenery of a hiking trail that requires some rock climbing between covered forest paths.  In addition to her own quartet, other Greve projects and collaborations include Wood River, Asterids, The Choir Invisible, Malte Schiller’s Red Balloon and the Stefan Schultze Large Ensemble.  None of that stuff sounds alike and none of it walks the straight-and-narrow, and I definitely recommend checking it out.  Music from Berlin, Germany.

Recommended: Hans Ludemann Trio Ivoire – “Desert Pulse” These are videos that I like: Best of Bandcamp Jazz 2017 (Part One)