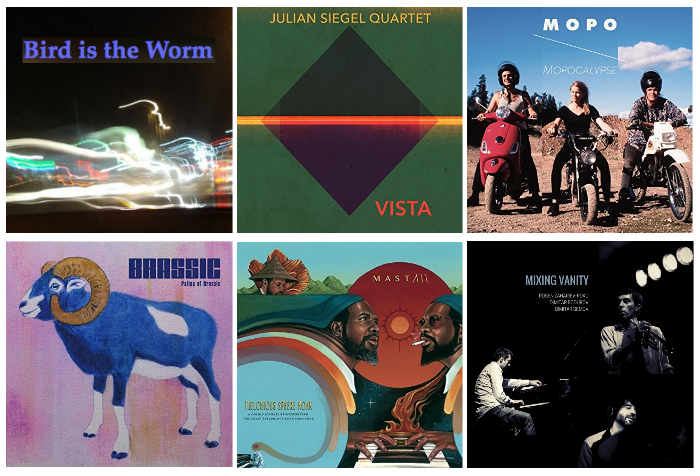 Nothing fancy, just some solid modern straight-ahead jazz from the Julian Siegel Quartet.  Siegel is often the one leading the charge, but there are plenty of moments when one of pianist Liam Noble, double bassist Oli Hayhurst or drummer Gene Calderazzo exert their influence upon the proceedings.  In particular, when Siegel goes low with his tone, the brighter shine of Noble’s melodic lines adds some excellent contrast in that way shadow and sunlight can transform a simple patch of grass into a magical tapestry of shapes and textures.  Don’t get me wrong, there’s nothing at all not to like with Siegel on saxophone, but, damn, when he switches over to bass clarinet, he leaves me wanting more.  Music from London.

It’s pretty easy to fall for the brass band stylings of BRASSIC.  The flavor of New Orleans traditional enters into things, but the Tokyo-based sextet of saxophonists Takeshi Kurihara, Junya Kondo, Hiromu Takahashi, trumpeter Yochi Masago, trombonist Daisuke Maeda, sousaphonist Mayuko Hiraki and drummer Shigekazu Otake flit about between approaches to the music, keeping things light and unpredictable.  Warm tones and hopping tempos are like a wide smile, a perfect demeanor for music that seeks to make everything alright.  Music from Tokyo, Japan.

Even when they slow things down a bit, the hard-driving Mopo trio brings a huge sound.  And while their sound possesses the strength to drive a hole straight through the base of a mountain, the tone more often than not is one of party-time atmosphere rather than wielded as a show of strength.  Saxophonist Linda Fredriksson, bassist Eero Tikkanen and drummer Eeti Nieminen stake their territory in the modern era, but a track like “Niin aikaisin” shows that some cool blues and swing isn’t out of their range or reach.  Otto Eskelinen contributes the workings of a Farfisa organ to the affair, which adds a nice harmonic texture.  As does Tikkanen when he switches over to violin.  Fun music from Helsinki, Finland.

There’s no mistaking this re-envisioning of the Thelonious Monk songbook as belonging to the modern era.  Today, really, and maybe even a little bit belonging to tomorrow, too.  But even an obstinate old-school fan is going to appreciate the way MAST (aka Tim Conley) gets the original melodies out front and center, allowing them to lead the way through unfamiliar interpretations of old tunes.  Electronic effects introduce sound textures never emergent on the original pieces, while cuts of Monk interviews dropped throughout the recording bring things back home, and in some important ways are reminiscent of the Monk documentary Straight, No Chaser.  The best approaches to take when performing the songs of the past are to make it very personal or very different… MAST does both.  Joining Conley are an A-list of personnel, many of whom have been featured on this very site:  Anwar Marshall, John Fraticelli, Makaya McCraven, Brian Marsella, Jonah Levine, Chris Speed, Daniel Rosenboom and Gavin Templeton.  Music from L.A.

This album is made from moonlight and meant to accompany the moon as a soundtrack late into the night.  The trio of trumpeter Rosen Zahariev-Roko, pianist Dimitar Bodurov and drummer Dimitar Semov express a melody with the most exquisite care and patience, and the spike of anticipation from hearing them develop is how this album gets its hooks in ya.  They add some electronics and percussion in tasteful doses, and it behaves more as quirks of personality than novelty.  Seriously arresting music, and an album that appears to have flown beneath the radar.  Let’s fix that.  Music from Sofia, Bulgaria.

Escape Argot has got a process, and it starts with just a tiny bit of violence You won’t attain a true state of peacefulness on “Lawaii,” and that appears to be exactly how this trio wants it