Recommended: The Westerlies – “Wish the Children Would Come On Home: The Music of Wayne Horvitz” 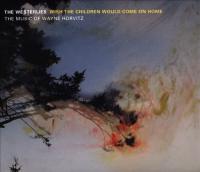 The music of keyboardist and composer Wayne Horvitz is a curious and compelling series of expressions.  His music is both an invitation and a command, and it follows paths rarely tread by others.  Over the course of thirty five years of recording music, Horvitz’s sound has continued to emerge and has achieved a singular identity, and that’s why new projects with new visions can be fundamentally different from those previous and yet still ring with an undeniable familiarity.

For the last handful of decades, the projects of Wayne Horivtz have taken the form of free jazz, straight-ahead big band, small combo, folk, electronica, chamber, classical, ambient minimalism and all the varied shades in between and outside those borders.  His output has been diverse and his creativity boundless.  Originally making his mark in the NYC downtown scene in the 1980s with the likes of John Zorn, Bobby Previte and Bill Frisell, he eventually moved off to the opposite coast and made a home in Seattle.  He continues to make highly creative music in his new digs, and, understandably, his mark influenced a new generation of musicians from the Pacific-Northwest scene.

Four such musicians are the brass quartet, The Westerlies.  Having called both Seattle and NYC their home, they set out to perform brass quartet music that, like the music of Horvitz, headed off in many creative directions.  It was only natural that they embraced the Horvitz songbook.

Willem de Koch, one of The Westerlies’ two trombonists, commented on what drew him to Horvitz’s music.  “Wayne has an uncanny ability to make his music accessible and catchy without sacrificing any artistic merit.  No matter how strange or “out” some of his music may be, it always has a strong sense of melody and an element of populism, Americana, and the blues,” adding, “Wayne’s music constantly stretches the listener while never alienating them.”

Following a performance of Horvitz’s music at John Zorn’s venue The Stone, they went into the recording studio and ended up with their debut, Wish the Children Would Come On Home: The Music of Wayne Horvitz.

Of remarkable achievement is how they dipped into the compositions of many different Horvitz projects, encompassing a wide array of sounds and expressions, and by finding the common traits shared by these musics, the Westerlies quartet tied the renditions up into a nice, tidy, cohesive bundle.  Furthermore, as Wayne Horvitz himself astutely points out in the album’s liner notes:  These compositions were not originally written for brass.

The Westerlies open their album with music that also signaled the opening stanzas of Horvitz’s solo recording career.  Their intriguing take on the early Horvitz composition “Please Take That Train From My Door” dates back to his 1985 album This New Generation.  One of the more arresting qualities of Horvitz’s early electro-jazz was the way he’d float the loveliest melodic passages atop beds of up-tempo electric beats and programmed rhythms.  And it’s Doug Wieselman’s languorous saxophone lines that the Westerlies zoom in on for their rendition, leaving out all the rest, and turning the upbeat original (with song title slightly altered) into an expression delivered as a solemn hymn.

The title-track “Wish the Children Would Come On Home” comes from a similar period and a similar project.  Originally appearing on the 1989 Horvitz release Bring Yr Camera and performed by his group, The President, this project was an early version of an electro-folk sound, but with a 90’s style fusion jazz.  The music gave hints of the haunting music that was to increasingly define Horvitz’s sound, and it was mixed in with the sharp dissonance of electronics and radiant melodic passages possessing an eerie but heartbreaking beauty.  The Westerlies use it to close out their album, beginning with bold pronouncements that sizzle and warp at the edges.  It recalls the original, but then enters a long interlude that brings their own brand of haunting beauty to the table… a sparse drone with a distant warmth and the rustle and moan creating friction with the prevailing harmonic stasis.

The Westerlies tackle three tunes from Horvitz’s 2002 release Film Music 1998-2001.  It was part of the (John Zorn’s) Tzadik label series Film Music, and it included an army of musicians that Horvitz had collaborated with previously during his NYC days and musicians that were an essential part of his Pacific Northwest projects.  Tzadik’s Film Works series covered a wide range of films and a wide diversity of sounds.  Horvitz’s contribution Film Music 1998-2001 embraced the spirit of that diversity and the craftsmanship of an excellent soundtrack.

The album is comprised of 47 album tracks, but with most lasting no more than a minute in duration.  The Westerlies curated the songs “The Store/The Campfire,” “The Circus Prospered” and “Barbershop” for their own album, and for those songs, the quartet captures the heartbreaking gentleness of the first, the enveloping languor of the second, and dive right into the bubbly euphoria of the third, matching the original’s propensity for bouncing notes off all four walls.

The Westerlies also chose a few tracks that touch upon one of Horvitz’s classical music projects.  The 2001 release Otis Spann & Other Compositions was Horvitz attempting to recreate the music of blues artist Otis Spann by focusing on the emotional reaction as a listener of Spann’s music, and then expressing it back out as classical compositions performed in collaboration with the Seattle Chamber Players.

The Westerlies version of “The Band With Muddy” comes out with more bombast than the original performance, and when it settles into one of the composition’s interludes of tranquility, they flex a bit more muscle.  However, the composition’s greatest strength is its patterns of staggered motion, and in this regard, both Horvitz and The Westerlies are as one.  Keeping on that theme, The Westerlies version of “9/8” has a sunnier disposition, letting go a series of punchy notes that only touch upon the melancholia of the original in the breakdown refrain at the end of passages.  The quartet circles around the original’s curious elegance, staying in close, but shooting crisper phrases and a motion more apt to float than flow.

Listening to them side-by-side, it’s easy to hear how the quartet’s inspiration from the originals developed into their own personal take, and is further illustrative of how there is no way to predict how the creative vision of an artist is going to differ from the vision of the artist who inspired.

Speaking of personal takes, it’s important to note that many compositions in the Hovitz songbook are adapted for his various projects.  Several of the songs performed on this recording by The Westerlies have also been performed by many different Horvitz ensembles.  It shows just how spacious the room for interpretation really is.  For instance, The Westerlies take an upbeat approach to the somber “Love Love Love,” maintaining a chipper attitude until the breakdown at the song’s conclusion, with a gloomy outro.  This approach differs from the austere grace adopted by the Seattle Chamber Players in a classical music setting or Horvitz’s Zony Mash quartet’s sonic moonlight blend of jazz, folk and pop on the 2000 recording American Bandstand (later renamed, Forever).

Horvitz’s Zony Mash quartet also perform the title-track to the 2001 release Sweeter Than the Day.  That album features Horvitz on piano (and prepared piano), the guitars of Timothy Young, bassist Keith Lowe and drummer Andy Roth, and using folk, rock, and jazz as their building blocks, they create an intoxicating mix of down-home cheerfulness and the sad melodic bliss of broken hearts in solitude.

The Westerlies play this one pretty close to the original, which allows them to highlight the ability of brass instruments to emit a massively sad tone within the same breath that their instruments are delivering fat, dense sounds… a lightness that strongly accentuates a quiet sadness.  If anything, the Westerlies enhance the melancholy of the original, eschewing the occasional burst of blues hopefulness for harmonies that lock down the blues in their darkest colors.  Upsurges in volume only further emphasize the heartbreak.

This, too, differs from another Horvitz project and their rendition of the song “Sweeter Than the Day.”  His chamber music project Four Plus One Ensemble gives the song a looser form, unstructured in comparison to other renditions, and transforms the sweet melody into a haunting beauty.

“Waltz From Woman of Tokyo” is another Westerlies selection that makes it onto several Horvitz recordings.  The Westerlies capture the song’s languid, flowing grace… with one deviation.  An interlude at the heart of the song sees them let forth a burst of activity that shifts into cheerfulness, sending out notes that bob along the surface of the melody’s wake before becoming immersed right back into the thick of it.

This interlude, in fact, is reminiscent of the flurry of activity from cellist Peggy Lee and her performance on the 2008 recording One Dance Alone.  Lee, along with Horvitz on piano, Ron Miles on cornet and Sara Schoenbeck on bassoon, they comprise the Gravitas Quartet, and are responsible for two massively compelling albums:  the aforementioned One Dance Alone and the 2006 recording Way Out East.

The Gravitas Quartet specializes in a heavy serenity, the kind of music that embodies the strange comfort of enveloping darkness in remote locations.  They also build the intimidating presence of large statuesque objects acquiring momentum.

The Westerlies rendition of the composition “You Were Just Here” doubles down on those qualities, infusing the song with a liveliness that pushes the momentum into a higher gear while still maintaining a tranquil ambiance.

Of this, de Koch notes, “Both of Wayne’s Gravitas Quartet albums had a huge influence on us as an ensemble.  The way in which they blur the line between through-composed and improvised material was a great inspiration to us, as well as their ability to create such a cohesive ensemble sound with such an unconventional instrumentation.”  From a personal standpoint, de Koch adds that the song “You Were Just Here” signaled the beginning of his addiction to Horvitz’s music.

Also on Wish The Children Would Come On Home are one (previously) unreleased Horvitz composition, “Triads,” and three improvisations on which Horvitz is a guest keyboardist.  All four of these albums tracks are brief interludes.  “Triads” fits in fine with the stream of the album’s prevailing sound.  In contrast, the three improvisations (titled “Interlude” one through three), with their bursts of dissonance and drone, harken back more to Horvitz’s sound.  And while they seem to stand out a bit too much from the rest of the album, it’s a nice reminder of where this music sources from, and it adds a refreshing bit of edge to the recording.

Furthermore, it appears that the improvised tracks were themselves not planned on originally for inclusion on the album.  Riley Mulherkar, one of the quartet’s two trumpeters, relates, “[During the recording session] we somehow convinced Wayne to get out his synth and electronics for one last song.  We jammed for hours into the night.  One of the takes is the title track, and you can hear fragments of our improvisations in the interludes throughout the album.”

That album happens to be one of the very best things released in 2014.

Jazz from NYC, but can’t overlook the effect of the Seattle scene on this music, as it’s Horvitz’s current hometown and where the Westerlies used to call their stomping ground.

This album received the #13 slot on this site’s Best of 2014 list.  Each subsequent listen is just further proof that this marvelous recording earned that praise and more.

These are videos that I like: Erik Jekabson String-tet at the Red Poppy Recommended: Pete McCann – “Range”