These are videos that I like: Dino Massa’s Kansas City Quintet “Echoes of Europe” 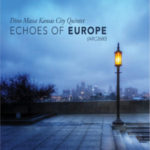 Today’s featured video is the title-track from the upcoming release Echoes of Europe by Dino Massa’s Kansas City Quintet.  It’s a nice straight-ahead collaboration of musicians from the Naples, Italy and Kansas City scenes.  And pretty much any video that slaps an album track over what amounts to b-roll of a travel show is gonna get featured on the site.  I think it’s a neat way to present the music.

Massa’s Echoes of Europe is getting released January 2nd, 2017 on the ARC label.  Until then, here’s that video to tide you over.

You can pre-order the album on Amazon (LINK).

Recommended: Mary Halvorson Octet – “Away With You” Recommended: The Delegation – “Evergreen (Canceled World)”