Now it’s starting to get busy.  The new release bin in the Jazz section is really starting to show some numbers, so get ready for your budget to start crying for mercy.  This week’s Pick of the Week is the first real statement made by an artist that, yes, 2015 has begun.  But it’s not the only excellent recording deserving of your attention this week, so I’ll stop delaying you from the important work of listening and say… 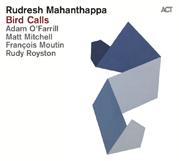 Using bits of Charlie Parker melodies and solos as the seeds of inspiration, Rudresh Mahanthappa cultivates those music fragments into his own expressions and in his own voice, and the bloom is dramatically changed from its origins.  This isn’t a Bird tribute album.  The compositions are all Mahanthappa’s.  This is about creative inspiration and the connections we make with music that affects us.  Read more about why I recommend this excellent album (LINK).

Pick of the Week.

A gorgeous new recording from Samo Salamon.  Joined by long-time collaborator, drummer Roberto Dani and saxophonist Paul McCandless, who adds oboe and bass clarinet to the affair.  Salamon’s guitar imagery has always possessed a strong folk element, and working with Oregon ensemble multi-reedist McCandless brings a shining brilliance to that facet of his sound.  This is music that drifts with a lovely, but uneasy serenity occasionally cut through with strikes of lightning and the crash of thunder.  A very distinct and enchanting personality to this one.

The album is Self-Produced.  Visit the artist site.

The newest release on the Smoke Sessions label, and it’s refreshing that this new label specializing in old-school jazz maintains that trend even when it applies to fusion.  Trumpeter Eddie Henderson was one who fully embraced the Miles Davis early-fusion period, and the opening two tracks to an album that encompasses the different approaches Henderson has brought to projects in his long career are drenched in that very cool early-fusion sound.  Joined by long-time collaborators, saxophonist Gary Bartz and pianist George Cables, along with the bass-drum combo of Doug Weiss and Carl Allen, the quintet hits a straight-ahead course, both on the bop and the fusion tunes.

Trumpeter Verneri Pohjola seems to revel in the big, expressive pronouncements.  The trumpeter’s notes always seem fat and with the deceiving calm of waves concentrically spreading outward.  A modern set that’s got some vague infusions of folk, which provides the music a cinematic flair.  It’s a quartet session, but the addition of guests on tenor sax, trombone and cello add some pleasant texture.  A solid modern jazz trumpet recording.

Interesting new release from the Vijay Iyer Trio, which reunites him with longtime collaborators, bassist Stephan Crump and drummer Marcus Gilmore.  Some of the tunes dive right into contemplative waters, reflecting the imprint of the album’s label, ECM Records.  The gorgeous “Wrens” displays that approach in its best light.  But then there are tunes like title-track “Break Stuff” and renditions of Monk’s “Work” and Coltrane’s “Countdown” which move with a lively playfulness and propulsion.  Iyer’s trio work has typically been cerebral first and the eliciting of motion a residual effect.  He evens that ratio out more evenly on his newest.  The result is a pretty friendly album.

After many wonderful expansive, big production recordings, it’s refreshing to hear the pianist in a solo setting. Peaceful, yet unconventional music. Read more about why I recommend this album (LINK).

Guitarist Card’s septet flits about from one modern sound to the other.  While unfocused, the stream of changes makes for interesting listening.  Some attention-grabbing moments.

A solid big band session, exuding both power and grace.  Conductor Gilkes also gets in some delightful moments soloing on trombone.  If you’re in the market for a big band album, you can’t go wrong here.

Gebhard Ullmann Basement Research – Hat and Shoes (Between the Lines)

Heavy presence doesn’t prevent a tunefulness from creeping out… lumbering though it may be. Two saxes, trombone, bass & drums seem to be working at cross-purposes, but by maintaining a close proximity, they induce a sense of tight cohesion. Ullmann makes a nifty statement with this one.

Monk compositions given a mild Latin jazz interpretation.  Piano trio augmented with additional percussionist accentuates the rhythmic possibilities of the original tunes.  Album is most gripping when pianist Conde phases in and out of the melodies.

Guitarist Lundbom keeps things moving and keeps it random.  His septet, stocked with musicians at home in this environment, help him retain a cohesion over seemingly disassociated parts.  Best is when everything gets tangled up in patterns easy to follow and trace.

Saxophonist Bennett returns with his peculiar mix of songbird jazz, eccentric pop music and folksy charm.  His newest ramps up the voltage on all three of those qualities.  It’s a smooth drink with an unexpected kick.

Highlight is when the pairing of vibes and guitar is at the center of things.  Sextet shows equal talent for absorbing moodiness and light-on-its-feet wind sprints.  Flirtations with post-bop, Nordic, folk, straight-ahead and pop music keep the ear interested.

The moodier their tone, the more evocative Reis’s quartet becomes.  But even when they build momentum, their catchy sing-song melodicism is no less captivating.  Good stuff.

Mainstream Brazilian jazz vocals session is a ray of sunlight.  Nice easy-going pace as it rolls out the warmth.  Nothing groundbreaking about this music, but it’s likely to cheer up its share of listeners.

Recommended: Rudresh Mahanthappa – “Bird Calls” These are videos that I like: Jeremy Udden & Nicolas Moreaux – “Bibi”