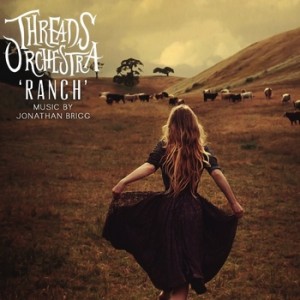 There is a thriving UK jazz scene that is quickly being redefined by a new generation of jazz musicians, versed in traditional jazz forms, but in possession of an approach that’s planted with both feet in the modern day.

The Threads Orchestra has now demonstrated over the course of its first two releases that it is a vital part of that new generation.

Whereas 2011’s Threads was a thrilling whirlwind of genre-hopping, 2012’s Ranch sticks to a blend of modern classical composition and jazz musicianship, and it doesn’t go wandering off. The end result is a thematic cohesion and linearity that bundles all the music up into one satisfying whole.

Based on the imaginary ranch conjured up in composer Jonathan Brigg’s head, a place, if the music is any indication, that is equal parts serenity and mystery.

On Ranch, the strings carry the narrative. While Kit Downes’ piano, the sax of Dai Pritchard, and Kris Wright’s drums have concrete points of view and are given the space within which to express them, it’s the trio of Frances Pye, Adam Robinson and Semay Wu’s violin, viola and cello that present a seamless wave of tempos and tones in a perpetual state of flux. The guitar of Chris Montague gravitates to its fellow stringed instruments, and by sacrificing solos to instead lend accompaniment support, its voice shines brighter still. The bass of Rus Pearson eschews an ostentatious show of strength in favor of some essential heavy lifting in the lower registers, making sure that the string trio and guitar possess an earthy element, keeping them grounded even as they soar above.

One of the Threads Orchestra’s most likable characteristics is that its music is extremely accessible, even though it is, at its heart, enigmatic and defiant of categorization. The string trio bring a classical music element to the music, though as performed in the dream of a folk singer. Guitar muddies the dividing line between jazz and rock to the point where it’s difficult to be sure where it’s standing at any one point in time. Drums and bass keep things steady on the straight-ahead jazz front, except when they go running along stride for stride with a piano that might start out on a modern jazz spot but end up anywhere else. Sax hides amongst the trees of strings, before suddenly bolting from the forest with a burst of intense bop and backed by a suddenly resurgent rhythm section.

Sometimes the music has a tranquil drift, sometimes the music shrieks and swerves with maniacal passion. There is no guessing where the music will begin, nor where it will end up. And considering that this is an album dreamed up in the imagination of a composer secluded out in the middle of nowhere, with no boundaries, then perhaps this albums sounds exactly as its origin dictates. In the short span of two years, Threads Orchestra has deftly illustrated a daring adventurousness in choice of music and an undeniable likability in its presentation of it. It bodes well for the future, for the UK scene and jazz as a whole.

Download a free album track at AllAboutJazz, courtesy of the artists.

You can stream the album, and purchase it, at the artist’s Bandcamp page.

You can purchase either the CD or the MP3 from the artist site, HERE.

I reviewed Threads Orchestra’s previous album, Threads, on Bird is the Worm.