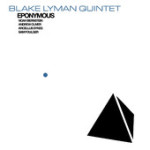 Melodically driven and rhythmically headstrong, the sophomore release of tenor saxophonist Blake Lyman is the kind of music that descends from Clifford Jordan’s noirish hard bop of the 70s.  Lyman’s quintet is firmly rooted in a post-bop environment, but it’s the same cinematic treatment of melodies, compact show of force, and definitive, flowing percussion that typified some of Jordan’s best work.  It’s also representative of one of the burgeoning Portland, Oregon jazz scenes.  Nice follow-up for Lyman, who was equally impressive on his debut, Anthology, For Now (a review, HERE, on eMusic).

Tarbaby – The Ballad of Sam Langford

New release from the Tarbaby trio of Orrin Evans on piano, Eric Revis on bass, and Nasheet Waits on drums (plus, guests Oliver Lake on alto sax, Ambrose Akinmusire on trumpet, and Matthew Evans on finger piano).  A modern version of the in/out jazz that drove spirited classic releases like Eric Dolphy’s Out to Lunch and Larry Young’s Unity.  Music that makes the head bop and the body groove, even though it often veers into territory more associated with the avant-garde.  Thoughtful music with plenty of tides and deep waters to go swimming in all day long, and keeping coming back for more.

Trombonist Adam Bartczak leads a nineteen piece ensemble of Denver area musicians in a nifty session of modern big band compositions.  And while the sections that resemble car chase scenes are sure to grab the ear, there are interludes of beautiful harmonic structuring that could melt Rocky Mountain snow with their warmth.  His debut album, which is a very promising sign.  Bartczak was a member of Tyler Gilmore’s 9th & Lincoln ensemble, another intriguing modern big band, and who released one of 2011’s better albums.

Yes, it’s an album of standards, but, damn, they really bring the old songs some new life.  I’m not saying this is a mind-blowing album or anything…  you shouldn’t expect a re-envisioning of “Autumn Leaves” or anything.  But the quartet of pianist David Kikoski, tenor saxophonist Bob Sheppard, drummer Gary Novak, and bassist Dave Carpenter (who, regrettably, has since passed) recorded a live performance to a small audience and offered up a wonderful set.  They close it out with a fantastic rendition of “Mr. P.C.” and it goes a long way to illustrating how much vitality this quartet is able to draw out of the well-worn compositions.  Good stuff.

Compelling avant-garde session, one that brings a vast array of instruments to the table, spread out amongst a busy quintet.  Some moments that mesmerize with an anxious drone, others that emit warbled sounds like a forest at night.  There are some qualities to this music that draws me right back in.  Four long tracks, none less than 22 minutes long, and keeps to an appealing ebb and flow.

Frenetic rhythms, spastic melodies, yet oddly tuneful.  I’ve been poking around drummer Oriol Roca‘s music for a couple years now, and he always finds a way to gain interest, and pianist Giovanni di.Domenico is an excellent foil for Roca on this recording.  Totally random, but would be interested to learn if the song “Hermafrobeat” sends anyone else’s cats into a crazed tailspin like it does mine.

Portions of these reviews were originally used in my Jazz Picks weekly article for eMusic, so here’s some language protecting their rights to that reprinted material as the one to hire me to write about new jazz arrivals to their site…