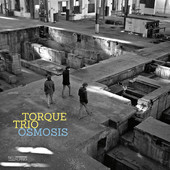 An album that has caught my ear lately, and which shows some sign of sticking around, is the new release by Torque Trio, titled Osmosis.  Two feet solid in modern territory for jazz piano trios.  Songs have a chatty demeanor, letting rich melodies coast along the surface of perpetually rippling percussion.  Very much from the school of Mehldau in how melodies develop in a twisting fashion that gives the impression of repetition, without it necessarily being so… a kind of perpetual motion that makes fast objects appear to be moving in place.

Tracks like “Stories to Be Told” and “Down the Rabbit Hole” skitter along, melodic phrases meshing well with a focused rhythmic gust.

Tracks like “A New Day” and “Desillusie” take a calmer approach to melodic statements, letting them breathe in their own time, occasionally interspersing some abrupt interplay between bass and drums to break up the flow a bit.  But, typically, they return to form before long.

And then there are tracks like “End of Days” and “Presikhaaf,” in which the trio accentuates the rhythms with choppy slashes and staggered gaits, and effective shape the melody with an elastic force.

“Implore” represents this album’s event horizon in terms of intensity, with the murmuring “Singing Bowl” sitting at the opposite end of that spectrum.

The album closes things out with “Song for a Dying Bird,” a melancholy tune that expresses itself patiently, and with a quiet grace.

A real likable recording.  One of those modern piano trio albums that clicks right into place.

The trio’s members call both the Amsterdam and Cologne (Germany) jazz scenes their home turf.