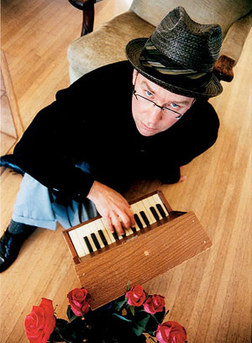 For some time, I’ve been wanting to write a series of columns about one of my favorite musicians, Wayne Horvitz.  Aside from the typical scarcity of time, the unexpected problem I encountered was how to present the material.  The question of how to structure a column(s) idea was more troublesome than I realized in the days before I first began this site.  Thankfully, Wayne Horvitz has just provided the method to accomplish this.

In honor of his 60th birthday, of which 35 years has been spent recording (and releasing) his music, Wayne has announced that he will be giving away a free track once a week for the entire year.  That’s fifty-two songs to add to your library as you begin (or continue) to explore his wonderful catalog.  He mentions in the announcement that some of this material was either previously unavailable or released in a limited format, so even if you, like me, have amassed a huge collection of Horvitz’s music to date, there are likely going to be items that we haven’t yet encountered… not to mention those projects which we can rediscover with the spotlight clearing the dust from their surface.

And me, I’m going to write something about every one of those downloads after each is released.  Now, keep in mind, those tracks will only be free for the week of their release… so be sure to check in here often.  Also, you can stay up to date on the status of these free tracks by following Wayne on his Facebook page and also on Twitter.  He’ll be releasing these tracks each Tuesday, so as far as the current free track goes, you have only a couple days to get to it.  So, about that free track… 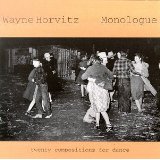 So much of the music of Wayne Horvitz has a cinematic quality to it, eliciting vibrant, sharp imagery, and voiced with a definitive point of view not unlike the framing of a storyline plot.  Even the casual music listener, once exposed to enough of Horvitz’s music, will begin to recognize his singular form of expressionism.  Horvitz has been involved in a vast array of projects, and many of them manifest with very different sounds, but the more that Horvitz’s fingerprints appear on a particular recording, the easier it becomes to recognize the music as belonging to him.  His solo project resulting in the 1997 release Monologue: Twenty Compositions for Dance definitely fits that bill.

Horvitz has a long history mixing modern jazz, folk, rock, pop and classical with an arsenal of electronics and effects.  It’s remarkable that he’s able to avail himself of so many influences and conjure up a piece that rings with such clarity.  These pieces, even those that behave more as sonic vignettes than they do “songs,” they have very clear lines of definition and are colored and shaded in ways that allow the nuance and detail to shine as brightly as the boldest, broad strokes.

Of great appeal on Monologue is how Horvitz fuses ambient, introspective passages with the harsh, industrial personality of electronics and effects.  Opening track “Shehechianu” gets right to the heart of this approach with its mix of short melodic bursts from piano juxtaposed against the sizzle and burn of electronics.  “Hand Over Fist” also mines this vein, with its free form piano landing squarely against the dissonance of electronic effects… no less active and random than their acoustic counterpart.

The focus on motion is especially evident in tracks like “Brand Spankin’ New,” with its infectious exuberance and playful bounce, as well as tracks like “Duke” and “The Kiss,” which aren’t so much love songs as they are the embodiment of supremely romantic moments spent slowly dancing into the late hours of the night.

Some of the pieces present a single face, allowing one aspect of the music to shine strongest.  “Doo Wop” is all about the contemplative keyboard, of a tranquil place covered with grey skies.  And “Portsmouth Stories” arrives a similar place, but it’s bathed in a cold moonlight.  “Down” is awash in effects, and somehow draws out a melody from within its cloudy exterior.

Monologue presents a curious beauty and a cryptic personality that is slowly revealed over time, but doesn’t create an obstacle to appreciating the former by making the latter quality inaccessible.  For those of you just now becoming acquainted with the music of Wayne Horvitz, it’s a great introduction to both the sound and spirit of this musician, and to those who have been long-time fans, it’s a nice reminder of the compelling nature of his music.

Download the free track by using the embedded audio player above or direct from Horvitz’s Bandcamp page.

By davesumner • Artist Overviews, Free Music, I Listen To All Of This, The Safety Net • 0