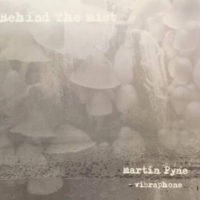 Martin Pyne has a new album out.  The solo project Behind the Mist nicely highlight’s the strengths the vibraphonist brings to the Busnoys trio, while also illuminating the breadth possessed by his personal artistry when freed from the requirements of collaboration.  The album has a theme.  Of the album’s ten tracks, all but the last are inspired by faeries of the British Isles.  The music makes this assertion an easy sell.  There is an otherworldly tone to this music.  The album also has some videos to partner with the music.  Visual artist Maria Hayes adds some striking imagery to three of the album tracks, and they have the dual effect of bolstering the music’s attachment to its theme and coaxing out elements that further enhance the overall experience.  The synthesis between sound and vision is subtle and emerges with a measured pace, and those moments when it all comes together border on the dramatic.

We need more of this.

There’s the dreamy presence of “Niamh of the Golden Hair” and the tumbling jumble of “Spriggans” and the furtive motions of “Yarthkin,” and Hayes captures all of these traits and the soul of the album with the divergent, yet complementary textures on her drawing, as well as the way they are revealed in synchronicity with the music.

“Changeling” is one of a handful of tracks where Pyne adds some real-time electronic effects to augment the vibraphone’s icy precision.  It’s a nice touch, not overdone by any means, and adds some welcome contrast with its wobbly melodicism and hazy harmonic accompaniment.  The title-track “Behind the Mist” also utilizes these effects.  The motion of the art on Maria Hayes’s drawing mirrors both the ambiance of the music and its own movements.

The album’s final piece sources back to Pyne’s Busnoys trio, and adapted for the current work.  “Song for Grace Melbury” may not fit in with the theme of supernatural creatures, but it has no difficulty blending in with the crowd.  This nod to the album’s cohesion is not something to be undervalued.

Behind the Mist is released on Pyne’s label Tall Guy Records.

Listen to the album at the artist’s Bandcamp page.

And here’s one final video, this to the song “Will o’ the Wisp”