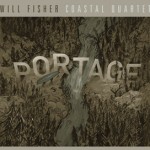 Whereas some drummers lead the charge and others spur on the ensemble from behind, Will Fisher takes the approach of examining the landscape from above and letting his rhythms settle down into the seams between the notes of others. The opening “The Great Karoo” puts this method on display right from word go.

Guitarist Mikko Hilden leads with a catchy line that bassist Mike Downes matches step for step. Pianist Nancy Walker adds her voice to the mix, followed by soft pronouncements from trumpeter Jon Challoner. Left to their own devices, these four instruments would make for an interesting tune of unconnected parts. The way Fisher lays the rhythm over the top of it all, however, brings cohesion to the tune, and, musically, offers up an extremely satisfying moment of musicianship, something that is repeated throughout of Portage. Fisher is the album’s glue and, though this is not an unexpected role for an album leader to assume, it is a surprise in the context of Portage being Fisher’s debut.

Following the ebb and flow of the opener, the album’s title track begins with an alluring drone, the bass playing arco, and shimmering cymbals and percussion jangles. The quartet lets the sense of mystery and spirituality hang in the air as Challoner’s trumpet moans forlornly, progressing warily as if a boat coursing its way through a foggy night sea. Fisher enters with a rhythmic cross-current that, rather than wash everything over, fuses the divergent patterns into one.

The middle section of the album falls into more familiar territory. With the pop and bounce of “Top, Bottom, Slide,” the quavering-heart ballad of “Vestibules,” and the rock-influenced modern jazz of “Lite Brite,” Fisher hits many standard thematic locations. No weak links here, but also not as fascinating as the opening tracks.

Things start getting interesting again with “Falling Arbutus,” which opens with an extended bass solo that is anything but obligatory. It begins slow, occasionally looking over its shoulder to be sure the listener is keeping up, then builds both in speed and intensity. At the finish line, when Downes hands the baton to the rest of the quartet, the ensemble doesn’t miss a beat: they stream right along as one. Trumpet and guitar lead the way, taking turns with fiery solos.

The album ends with “Cape Breton Lullaby,” which covers the expanse of two tracks. The lullaby begins with a piano solo that doubles as an invitation to a quiet end of the night. The intro leads into the quartet’s reunion, and the album’s grand, and gracefully restrained, finale. Chaloloner plays long sonorous notes, Hilden wavers in the distance, Matt Giffin’s piano expands on the seeds of its solo, and the rhythm section skips like stones across the water. It’s a strong end to a very strong album.

Jazz from the Nova Scotia, Canada scene, though Fisher has been living in Louisville, KY the last couple of years.

You can download a free album track at AllAboutJazz, courtesy of the artist.

You can stream the album on Fisher’s Bandcamp page.  You can also purchase it there, in many different file formats, including lossless.