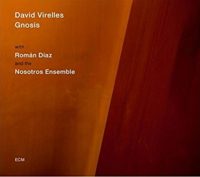 On Gnosis, there’s a startling convergence of Cuba and NYC, and neither music influence is left unchanged.  The clash between a chamber music sparseness and Cuban folk flow is as dramatic as the sky during a full eclipse, as is the resultant tension of one aspect seeking ascension over the other.  Heavy on percussion and strings, this large ensemble offering from pianist David Virelles possesses both an improvisational streak and a classical framework, and it’s why at times this music seems impenetrable and then suddenly it’s a welcoming, open embrace.  At times, it can be a challenging listen.  But challenges are fun, especially in music, and it’s the kind of quality that generates some serious intrigue.  On Gnosis, there’s plenty of that.  For David Virelles, it’s becoming a common trait in his recording career.

Read more at Bird is the Worm.