Harold Budd, Mary Lattimore and Nief-Norf at Big Ears Festival 2019: Off the road and straight to church

I’ve been obsessively searching the internet for news of an upcoming release by Harold Budd and Mary Lattimore.  I haven’t found anything yet, but I’m not giving up.  Nor would you, had you been lucky to witness the collaboration of Budd, Lattimore of the Nief-Norf ensemble at Knoxville’s Church Street United Methodist Church.

I had only just hit the exit, parked my car and began hustling across downtown Knoxville to get my ass in a pew.  I was on a mission.  Interstate 75 was crap for construction traffic slowed down to a crawl, already causing me to miss one of the Friday shows at Big Ears Festival 2019, but I’d be damned if I’d be late for Budd & Lattimore.  There was so much great music on the festival line-up, and I wanted to see it all, but if there were three acts I had to choose above all others, one of those would be the collaboration of keyboards and harp and percussion set amongst the stained glass and cathedral ceilings and wood rafters and archways.

For me, the music of Harold Budd has often had a reverential quality to it, and one album in particular has been there for me in troubled times like a proxy for god.  The quality of music that it can be the source of love and light and comfort when life grows dark and despairing, causing a temporary amnesia that everything will be okay cannot be overvalued.  For me, and many times, the Harold Budd & Brian Eno recording The Plateaux of Mirror has been that beacon to return to a state of well being and calm, a remembrance of all that’s good in the world and the beauty each of us is capable of producing.

But that music is not just a rescue mission.  It is also the perfect note on which to end a sublime evening, an enchanting kiss goodnight and into sweet dreams.  Many have been the night I’ve been done with the day job, then done with night writing, but my mind too active to go yet to sleep.  And so I wind down with a good book, some tea or whiskey, cats curled up beside me, and peaceful music on the stereo.  The music of Harold Budd has always been a wise choice in these conditions.  It has been something special that makes what might otherwise seem mundane become transformed, even if just a little bit, into the sphere of life where a sense of the momentous creeps in and reminds us that many of the moments we should be celebrating in our lives can slip by unnoticed if we don’t open ourselves up to them.  Creativity, whether it be our own or that of others, is one of the very best tools to make ourselves more receptive.

And Mary Lattimore, she’s a more recent development in my life, but has stood out lately as yet another example of why I never tire of racing down rabbit holes in search of new music.  I’ve become enamored with the harpist’s music and looking for an excuse to make the formal introductions with this site’s listeners.  Hello, please meet Mary Lattimore.  The Los Angeles-based harpist has most thoroughly captured my attention with her 2016 Ghostly International release At the Dam.

The sound of her harp is like predawn mist swirling above the undisturbed surface of a forest pond, strands of melody chasing one another to where it achieves a synchronicity with every breath, every heartbeat, every action.  And yet there abides an undeniable chasm between the melodic filaments, as if the elements might always hover nearby one another but never be united as one.  There’s a tension that comes from that kind of relationship, and it makes for the most alluring division of attention between the separate and distinct elements, and also on those moments that verge upon a state of unison.

So, yeah, I parked my car in a lot by the railroad tracks alongside the press check-in area, and then ran as fast my feet would take me and my dignity would allow (I look ridiculous when I run), and got myself over to church. 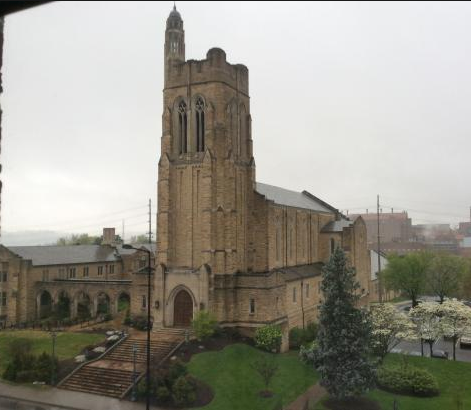 Knoxville’s Church Street United Methodist Church sits at the edge of downtown, and an easy hike from the opposite end where I had parked.  (A later installment of the Big Ears Fest will talk about the layout of downtown, the easy ways to traverse it, and how admirably simple the city and event organizers make it for people to get around… festival or otherwise). 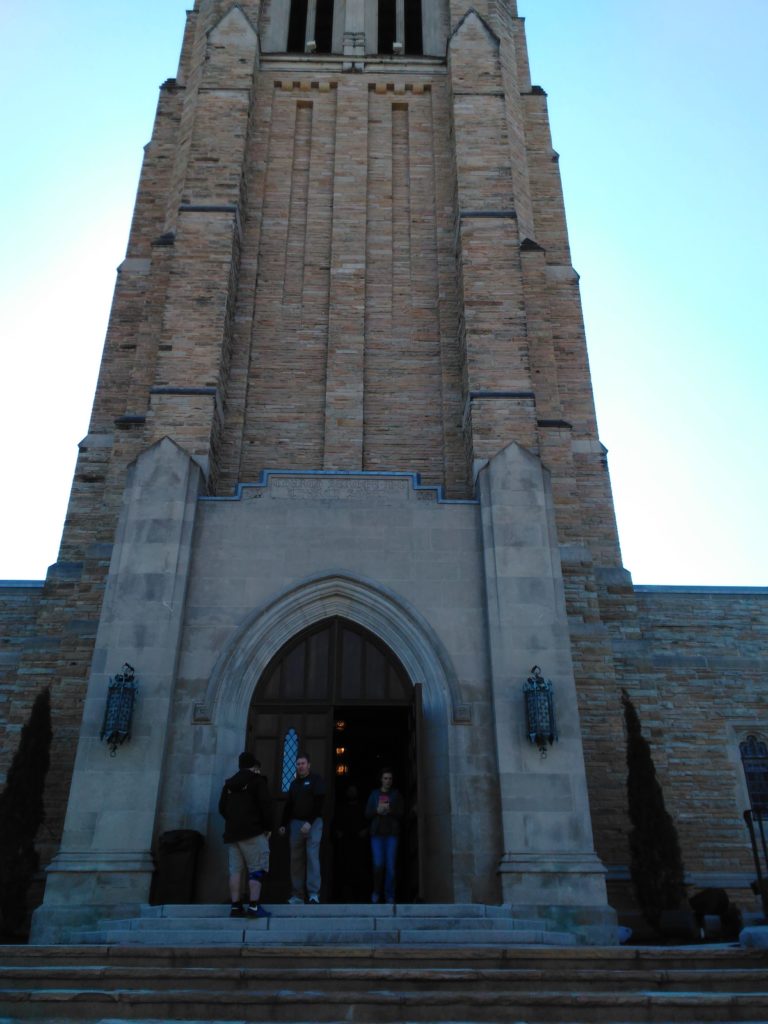 After driving at a rate of 80mph for the hours just preceding, it was an odd sensation to sit perfectly still and listen to music that existed in a state of hushed anticipation, as if even the musicians weren’t sure what sounds would come next and were as likely to be as surprised as the audience.  But I was enraptured by this performance, and as I type this column up, it’s really sinking in just how strongly the show resonated with me… it’s like the electricity of the experience is firing right back up again, as if I just a minute ago stepped out of the church and back into the cool air of downtown Knoxville, TN.

The interior was gorgeous and couldn’t have been a more perfect fit for this specific performance.  This is music of an ambient nature, where sounds are meant to linger and breathe and drift through time and space with the patience of starlight stretching out to the naked eye here on Earth.  And it resonates with that same enduring strength, and so the space this room afforded was a perfect fit for the sonic intentions. 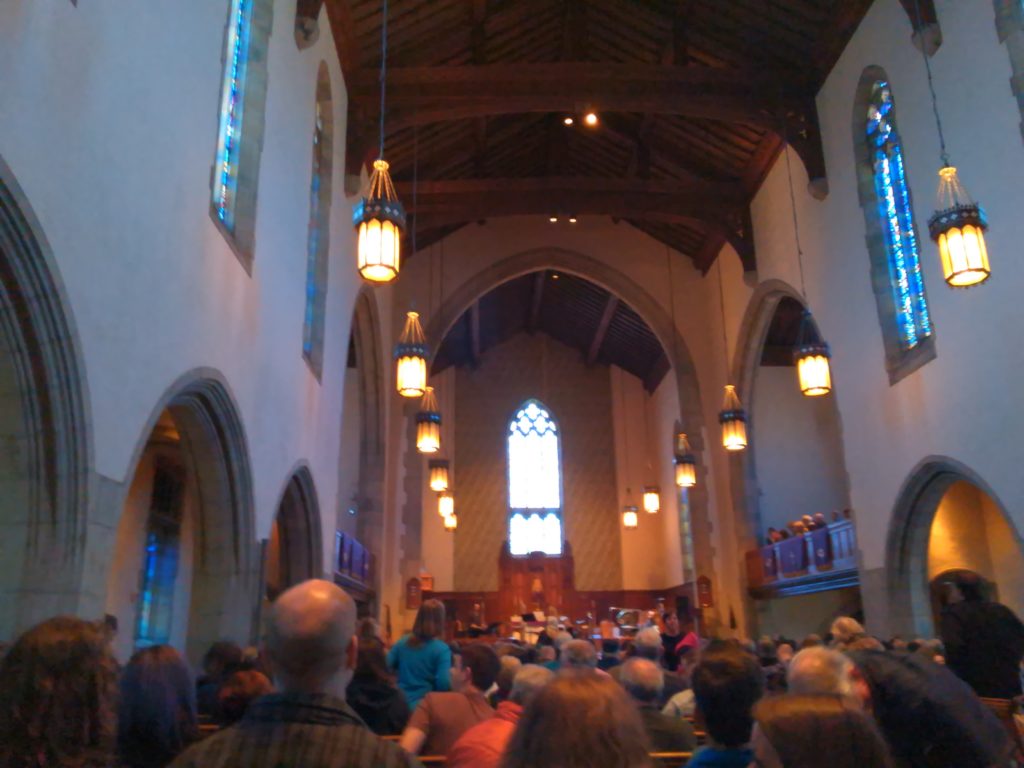 How long did they play for?  An hour, two?  I forget exactly, but I do remember that when it was over, it felt like it ended all too soon.  I could’ve sat there for hours and not stirred.

The isolated chirp of crickets.  A forest stream gurgling cheerfully to itself.  The rattle of leaves as a soft breeze glides on past.  The soft pulse of starlight, so far away yet so close.  Sound and motion that never rises above a whisper, yet so powerful as to cause an enduring tranquility to descend.  That’s what Budd, Lattimore and Nief-Norf did amongst the stained glass, raised archways and wooden beams that afternoon.  The flutter of harp, the purring of keyboards, and the murmur of percussion were a profoundly beautiful moment in time, over and over again.  This wasn’t music heard and seen so much as it was breathed in and out.  It was an intimate experience.  This was why I drove all morning to be in Knoxville.

The music was in my head after I left the church and began wandering Knoxville’s downtown streets.  The music is still in my head today, and it’s why I keep searching the internet for news of this music, or something like it, making its way to a recorded medium, and, soon after, into my music library.  I am so ready for it.

After the show, it was nice chatting with a few of my fellow listeners.  We talked about what we’d just heard, what we’d heard from these musicians previously, and what other shows we were looking forward to.  It was a kind of camaraderie that I experienced a handful of times during the festival weekend.  So enjoyable, even, that as I think back upon it, I’m a bit regretful that there wasn’t even more of it.  That kind of event, it’s a pleasant feeling to share with others what’s going through our hearts and minds.  And Big Ears Festival was exactly the kind of environment where those types of interactions would thrive.

I did go wandering the streets of Knoxville for a short time, and scoped out a place to eat a meal (covered in a later chapter of this story).  Also, as was the case for much of my festival experience… not much time to spend before the next show began.

Up next:  Back in church, and why not, because Ralph Towner is a god.