Bird is the Worm gets a shout-out on NPR’s A Blog Supreme (thanks, Patrick)

As the title says, I got a mention on NPR’s A Blog Supreme, in their weekly Around the Jazz Internet column.  You can read the article HERE.

I’m flattered by the shout-out because it’s always nice to know that people are reading my site and finding something to like here, but also because A Blog Supreme is a site that I personally enjoy reading, and it’s a nifty feeling when the reader learns that he is also a readee, too.  (And, yes, I’m leaving the word “readee” in place, even though my site’s spell checker and grammar adviser screamed in pain after I typed it.)

A Blog Supreme is run by Patrick Jarenwattananon.  I don’t know him personally, but based on the quality of content on A Blog Supreme, from my outside perspective, he seems like one of the people helping to make Jazz a better place.  Thanks, Patrick.

Here’s a link to NPR’s A Blog Supreme.

A few notes on other items in that article:

For the record, I voted for the Takin’ Off version of “Watermelon Man” in Patrick’s Herbie Hancock twitter poll.

Aside from simply preferring the Takin’ Off version. that album is all wrapped up in nostalgia for me.  It’s not my favorite Hancock album, but it is probably the one I have the strongest memories of.

I was well into my discovery of everything jazz.  I was at the stage where I was adept at discovering new jazz through some of the standard avenues that most jazz fans become accustomed to… branching out by sideman, other artists on the same label from the same decade, etc etc etc.  I, also, was getting pretty good at making educated guesses at what I might and might not like, but still wide-eyed to the point where there really was no such thing as a bad album choice.  I was almost exclusively listening to jazz from the fifties and sixties at this point, though occasionally take a hit on new releases; Bill Frisell, certainly, Henry Threadgill, too.  Javon Jackson, Omer Avital, Donald Harrison, Joshua Redman, Wayne Horvitz, some ECM titles here and there, to name a few.  But mostly I was crunching through anything that was on Blue Note, Prestige, Riverside, Impulse, ESP, Columbia, Steeplechase, old-school ECM, Muse and Joel Dorn’s wonderful 32 Jazz re-issues of the Muse label, and so on and on.

I was living in Denver, up on Capitol Hill, and within walking distance of all types of great music stores.  My favorite of the group was Jerry’s Record Exchange, over on Colfax.  I could go on all day about that place, but I’ll save it for a future post.  Also within a short walk was Wax Trax, which back in the 90s, took up almost half the block of 13th, between Washington and Pearl.  Wax Trax had their main store right on the corner of 13th & Washington, then also had a used store next door, and a vinyl only store right across the street.  I want to say that they also occupied another storefront along that stretch, perhaps a Jazz & Blues only store, but the memory is a bit hazy.

So one day, I’m out walking around my Capitol Hill neighborhood, just enjoying a beautiful autumn day and basking in the joy of living in a city where mountain ranges loomed over the horizon and the future was as wide as the Big Sky above me.  Naturally, I said to myself, “Let’s go buy a new cd!”  So I walked into Wax Trax and began flipping through the racks.  I wasn’t there long.  I was browsing through the Herbie Hancock section when I saw the cd of Takin’ Off. 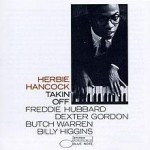 Aside from the strong visual appeal of yet another classic Blue Note album cover, I immediately noticed Dexter Gordon‘s name appearing as a sideman.  Gordon was a huge favorite of mine then (and still is, actually).  I was completely hooked on Gordon’s One Flight Up, and probably owned another ten albums of his at that point, most of them as the session leader.  So, one, I was intrigued to hear him in a sideman role, but waaaay more intrigued by hearing how Gordon and Hancock meshed.

I mean, right there in front of me, an opportunity to hear Dexter Gordon and Herbie Hancock, two of my favorite jazz musicians (and two of the first jazz musicians I ever heard, but that’s a story for another post), and it;s album that has been waiting for me to hear it for nearly thirty years.  I grabbed that cd up, paid for it, and walked home, feeling even happier than I felt before entering the store.

It was one of those rare and wonderful days when nothing particularly momentous occurred to time stamp the day as special, but was simply filled with small observations and tiny events that were individually relatively insignificant, but their sum total was a reminder of how massively joyful life can be… the sun lighting up the Rocky Mountains, the color of autumn leaves blanketing the neighborhood, a quick stop into a favorite bar for a quick shot and word with the friendly bartender, an exchange of waves with familiar faces from the neighborhood, the act of walking into a music store on a whim and finding a gem of an album… everything.  It was one of those days where the day could do no wrong.

And it didn’t.  Takin’ Off was a blast to hear.  I ended my afternoon sitting in my 4th floor apartment, listening to the album as I read the liner notes and looked over the session photos, my windows an unobstructed view of the Rocky Mountains and the downtown Denver skyline.

And regarding that Brian McKnight – Duke Ellington Orchestra thing… that was real?!  I thought that was just a running joke you and Nate Chinen and Jason Crane had going on Twitter.  Guh.