Recommended: Josh Maxey – “The Language of Sound and Spirit” 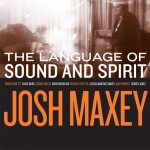 Sometimes it’s all about setting the tone.

If done right, if the musician finds a way to indelibly stamp the album’s vision in those brief opening moments, no matter what comes after, those notes are imprinted on the listener’s ears.  And if the music varies from opening note to last, the juxtaposition of the memory of the introductory sound and that which follows, potentially creates a complex sonic palate that makes for the most fascinating music.

Guitarist Josh Maxey does just that.  If trumpeter Miles Davis’ title-track to In a Silent Way conjures up images of a lighthouse looking out over a serene harbor on a cloudy day, then Josh Maxey’s opening track to The Language of Sound and Spirit is the boat drifting in slowly on languid ocean waves and aimed for the pier.  And though the album gets rockier and fiercer as it proceeds, it never shakes that initial sensation of blissful peace.

The opener is simply titled “Part I.” Maxey’s guitar bends notes, twists them like misshapen glass until they sparkle and glow and warp light all over the place.  Jeremy Noller delicately crashes cymbals across the surface, his bass drum a thumping undercurrent.  Chase Baird calls out plaintively on sax, the caw of seagulls over the open water, while Brian Charette’s organ eerily encircles the entire crew. It’s life on open water.

There’s a brief interlude of sax on the loose and drums gone wild.

And that’s when the album starts to swing.

Tracks “Part II” and “Part III” keep an oft repeated phrase on sax in their pocket as the band grooves along.  Maxey and band keep a light step through it all, and their path is untroubled.  It’s not so much that this music sounds well-rehearsed as it does that the musicians’ vision of what the music should be is so clear that they can’t help but hit the right notes.  This, ultimately, provides a seamless presentation of the compositions with all the glorious joy of group improvisation.

“Part IV” is a stunning track.  Rustic, with an easy sway and churn.  It’s a blues, but as viewed in the reflection of disturbed water. Maxey’s electric guitar takes an inquisitive approach to notes, but when it finds one it likes, he sets it on fire.  Michael Cioffero sidekicks on acoustic guitar, adding a rhythmic ingredient that imbues the song with a Big Sky expansiveness that’s as startling as it is exemplary. Baird moves in with sax, and solos over the top, and Charette also, in turn, launches into a solo of his own, but it’s when he and Baird shadowbox that they truly shine here. Throughout it all, Noller’s drums fill in every crevice, his cymbals like glue between the notes, and maintains the tune’s breezy swing.

The album ends with “Rehearsal,” a return to the sound of those opening moments. A little more dissonant this time around, a bit choppier, but no less resonant. That it fades out, slowly, distantly, is not only apropo, but thematically satisfying.

Josh Maxey is on a quest to compose and record six albums in one year’s time. This album counts as number three in that effort. It’s a remarkable statement that he can bring about creativity this inspired on the fly, and in the slim time frame he’s afforded himself.

You can stream the entire album on Maxey’s bandcamp page.  You can also purchase it there.  And remember, bandcamp allow you to download files in many formats, including lossless, at no extra charge.

Jazz of the Past and The Art of Time Traveling Bird is the Worm gets a shout-out on NPR’s A Blog Supreme (thanks, Patrick)