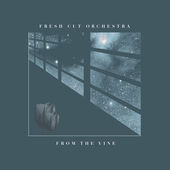 Considering how the Fresh Cut Orchestra is comprised of bandleaders drawn from a diverse group of projects, From the Vine displays an impressive solidarity.  Yes, the varied influences are all there and show their faces throughout this debut, providing the album with depth and substance to back up its engaging personality.  And FCO co-leaders Jason Fraticelli, Josh Lawrence and Anwar Marshall deftly balance the importance of reflecting a myriad of traits with that of bundling it all up into something cohesive.  But it’s the way in which the ensemble is able to present an all-encompassing voice and a solitary point of view that really clinches the success of this outstanding recording.

The heart of the album is the six-part “Mothers’ Suite,” which draws its inspiration from a recent passing of a family member and, soon after, an addition to the same family.  The profoundly felt emotions that draw upon the experiences of death and life shine strongly from these tracks.

The opening section, “Birth Of A Child, Birth Of A Mom,” with its swirling mists of keyboards, effects and the sound of birds calling out create an ambient tone that is positively cathartic.  This is further enhanced when the wind instruments make their entrance with lovely washes of harmony.

Those harmonies continue on “Mother’s Love,” but now by booming out with a celebratory note and a sunnier disposition, and providing the space for a saxophone to break from the fold and solo atop the strong rhythmic currents.

Those rhythmic currents grow even stronger on “Ritual Of Take,” and grows increasingly dense with details, while bassist Fraticelli burrows a melody just beneath its surface.  For a song that is all about the percussion, the song is strikingly tuneful.

The pronounced effect of the bass is continued on “Elegy For A Mom.”  Evocative, ferocious.

Part four of the suite, “The Funeral,” is serious blues.  Piano brings the heavy contemplation, while guitar contributes an uplifting expression of melancholy, which, in turn, is balanced nicely by the solemn harmonies from the wind instruments.

“Migration Of Spirit” explodes right out of the gate with guitar screams and hard-charging drums.  On the other hand, the suite’s final act, “The Reawakening” has the reverential, yet celebratory tone and warmth of a New Orleans funeral march.

The album ends with two tracks that are not part of the “Mothers’ Suite,” and, thankfully, they fall naturally into the flow of the album.  “Uptown Romance” is a nifty large ensemble ballad, full of life and feeling and an eye for the heartstrings… and the first instance of something that qualifies as straight-ahead.  Conversely, the album ends with the least straight-ahead tune.  “Sanguine” has an ingenuous mix of jazz ballad, lounge, R&B and rock… a formula that renders the music less like something found in the Jazz section and something more akin to the genre-crossing intelligence of Prince’s out-there experiments.

It’s a smart way to end an album that, all throughout, devises a method to give unclassifiable music a distinctive, recognizable sound.

Jazz from the Philly scene.