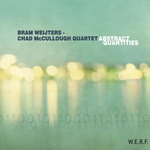 There is a workmanlike quality to the magic this quartet creates with each recording.  Abstract Quantities is the third album from the quartet led by pianist Bram Weijters and Chad McCullough, and much like the two that preceded it (2011’s Imaginary Sketches and 2012’s Urban Nightingale) they go about their job of crafting expert melodies and seamlessly fusing them into place with logical rhythms and harmonies that achieve their function with a remarkable precision.  The result is a series of striking tunes that give the sense of possessing no beginning and no end, and radiating an individuality that draws the focus on the song of the moment with no regard to what has come before and what’s up next.

The album sets a tone immediately with “Billions,” with its rhythmic surges of intensity and a gentle melodic caress, establishing a balance to their influence that borders on perfection.

There’s a captivating way that “Glorious Traffic Jam” switches between tuneful sections that sound perched outside on the church steps and discombobulated passages that sound suddenly broken free from a pressure chamber.

The album also finds room for the moonlight reveries of “Hesitation” and the subtle, but determined undercurrents of “The Same But Different,” as well as the pop song sweetness of “Little Song (for Mirthe)” and the self-reflective “Winter’s Lament.”  And though none of them present themselves as having any connection with one another, the quartet snaps each of those magical little gems into place, side by side, with the skill of an artisan.

There are three short pieces that serve as introductions to the songs that follow them, but each with so much story and so very immensely captivating in the telling, they stand alone as proper songs.

The album ends with the swinging “Acceptance or Denial,” an upbeat tune that seems strangely out of place with the rest of the album, and, thus, just as strangely, serves as a perfect, satisfying choice for a credits roll.

Yet another solid, absorbing album, in what’s becoming a regular thing for this quartet.  This qualifies as their best so far.

Jazz from the Antwerpen, Belgium and Chicago, IL scenes.