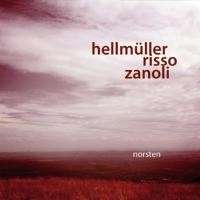 An album I’ve been going back and forth on is Norsten, the new release by the trio of Hellmüller Risso Zanoli.  It’s an album that shows two faces.  When it expresses itself as a straight-forward modern guitar trio, the music scoots along just fine, but there isn’t any ingenuity that would cast this recording as something stellar worth raving about.  On the other hand, when the trio accentuates a folk music influence, the songs are terrifically engrossing.  A track like “Piu,” with its murmurs of bass string and arco moans, the fluttering of guitar strings, and the gentle crash of cymbals and brushwork… this is captivating music.

But whichever of two faces the trio reveals at any one moment, the music remains light, serene and breezy, a sense of freedom to improvise on a whim… even if it so happens that the trio are following a planned script.  That this music remains so agreeably unconstrained is what catapulted this album up to where I wanted to give it a mention.  “Alle Zattere” is a great example of this.  Beginning with the alluring curl of a melodic phrase, the insinuation of such a form drifts away as all three musicians begin picking their own way ahead, each path intertwined with the others.  The tune becomes more free, losing form without sacrificing its shape.  And then, after a brief reprise to the opening state, they break into a brisk cant, the rhythmic edge completely in synch with the melodic designs.  It’s a captivating moment, and it reflects this album in its best light.

Some very bright moments on this very enjoyable album.