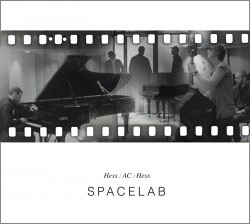 The risk of running with the minimalist jazz approach is that doing more with less is awfully difficult to begin with, but the greatest pitfall is that even the efforts that fall short still sound pretty damn good.  There’s definitely a time and place for some serene piano melodies atop a deep bass hum and the rattle and hush of drums.  Quiet music for quiet mornings, and there is a sizable contingent of jazz musicians out there laying down that kind of modern ambient jazz piano trio work.  It’s a scenario that breeds mediocrity and drowns the playing field with a heap of albums that do a decent job of making sleepy music, but not much more than that.  They often get billed as “cinematic,” which is just a degree or two away from also falling under the category of “dull.”  It takes a real talent to create lively environments within that minimalist context, of a virtual universe of stimuli and interactions and expressions within a handful of notes.

The trio of Nikolaj Hess, Anders Christensen, and Mikkel Hess achieve that level of proficiency on Spacelab, their newest release as the Spacelab trio.  And it’s a bit of a departure from their 2009 release, The Champ, which featured Hess on organ and Wurlitzer, and more often than not was pretty upbeat.  But it’s a new day on their 2014 release Spacelab, and that day is exemplified by music that embodies the peacefulness of a sun preparing to rise above the horizon while the whole city still sleeps.

It’s gotta have that element of wakefulness, mirroring the progression of the sleeper becoming increasingly aware, then more animated, and then fully up and away.  The restless activity of Christensen’s bass on “Jamil,” and its accentuation by Mikkel Hess on drums, it’s an undercurrent of kinetic energy that couldn’t crack an icy pond, yet is visible beneath the surface and felt just barely in the soles of ones shoes.  Meanwhile, Nikolaj Hess murmurs on piano with an inviting sparseness that respects the stillness in the room.  It’s an equation that is perpetually adjusted as the album continues, with the music’s liveliness gradually rising.

The beautiful phrasings by Hess on “Sunday Grace” is the kind of piano magic that can occur with the quickest of deliveries… knockout punches that only travel a matter of inches.  It’s a resonance that Hess serves up time and time again on this recording.

A few tracks raise the heart rate.  “Habibi” signals the album’s home stretch.  Hess’s piano becomes more pronounced.  Mikkel Hess doesn’t hold back much on drums, yet comports himself in a way that helps maintain the serenity, even at a time when its existence is threatened.  It’s a welcome play on tension, and to show by way of illustration that a certain volume and intensity can be achieved and yet still remain, for all intents and purposes, music for quiet times is something else.

And much as he did at the top of the album, the deep voice of Christensen’s bass echoes throughout the curtain closer “Lu Bird.”  An almost sing-songy contribution at times, his bass reveals the lyricism that lies at the heart of what this trio does throughout the album, with so little offering so very much.  A gradual rise in volume and intensity crests, and the trio fades out with some final solemn phrases of melody.

Listen to another album track on the artist’s Soundcloud page.

Other Things You Should Know:

I review another Nikolaj Hess recording on this site, his trio with Kenny Wollesen and Tony Scherr.  It’s not that far removed from Spacelab, but it does behave differently.  The rhythmic elements are more pronounced on that album, entitled, simply, Trio.  You can read the review HERE.

Also, if you like this Spacelab recording, I highly recommend checking out the music of the Marcin Wasilewski Trio.  Specifically their release January, which was one of the best things to come out in 2008.  Their 2011 release Faithful was pretty good, too.  That one I talk about on this site, which you can read HERE.  It’s part of my Best of 2011 columns when I first started this site up.  Just little synopses of the various albums.  I recommend their album January much more strongly.