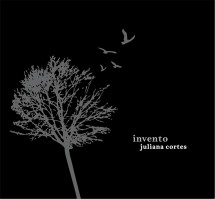 Invento is a captivating mix of Brazilian, jazz, rock and pop musics from vocalist Juliana Cortes, who fills out her ensemble with a healthy dose of stringed instruments while providing some balance on the percussion end, too.  Cortes has a straight-forward vocal delivery, which makes the sudden flourishes and expansions of her sound that much more dramatic.

The variety of stringed instruments, from electric & classical guitars to the ten-stringed viola caipira, cello and oud, they all add some wonderful texture to the affair.  When they come together, it leads to captivating moments.  The way oud enters the frame near the end of “Que Horas Não São?” is one such moment.  “Indo Ao Pampa” matches up Cortes’s moody delivery with stringed accompaniment that leaps about enthusiastically.

Cortes is more than able to carry a tune on her own, but there’s no overlooking the magnetism when joined in a duet by vocalist Vitor Ramil on “O Velho Leon e Natalia em Coyoacan.”

Several tracks possess a necessary edge, and they result in emphasizing the gorgeous melodies they live to serve.  “Tu Nombre y el Mio” hits that pop rock territory, with the tempo becoming more pronounced in collaboration with some electric guitar heat.  “Achado” mixes in some bursts of electric rhythm guitar between long stretches of folk song lightness, and the ebb and flow between the two makes for the sweetest kind of tension.

Just an enchanting album.  Fans of the music of Vinicius Cantuaria should be giving this one a listen.

Some of this review was used originally in the weekly new jazz releases column I write for eMusic, so here’s some language protecting their rights to the reprinted material as the one to hire me to write about new jazz arrivals to their site…

As always, my sincere thanks to eMusic for the gig.

Recommended: Hess/AC/Hess – “Spacelab” My new eMusic Jazz Picks are up at Wondering Sound