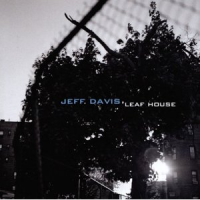 An aggressive album that finds a myriad of ways to express it.  Drummer Jeff Davis leads a trio through a series of tunes that rarely telegraph a punch.  Rhythms get delivered in heavy flurries, and melodies are alluded to in bits and pieces, and usually with a twist.  Leaf House is Jazz album masquerading as hard-boiled detective novel.

But it’s not all mystery, nor does the album lack trends and characteristics.  Opening tune (and title-track) “Leaf House” displays the furious bursts of cadence that suddenly cliff dive into silence.  A song may seem like it’s over, but then Eivind Opsvik’s bass bounds back onto the scene, with Davis’s drums to back him up.  And then there’s second track “Faded,” which attempts to instigate a concussion, but then suddenly Lossing enters with a shimmering blanket of piano beauty.  “Catbird” is a bit more reserved, and it gives the impression of dancers executing a jitterbug on a steep flight of stairs.

The forceful nature of this music is a result of the trio’s group play.  Even when they engage in animated conversations with one another, notes flying like stream-of-conscious poetry, it’s readily observable that they’re all on the same page, all moving in the same direction, with a view on the same horizon.  That the trio has managed to get volatile music wound up so tight seems directly attributable to the energy they emit.  And when they generate a head of steam, as they do on “Transitional Whales,” starting slow then accumulating strength and speed over the course of the tune, the trio transmits a sense of the unstoppable.  It’s a pretty nifty effect on an album charged heavy with electricity.

We each of us have our different ways of connecting with music… our different approaches and methods, our unique preferences and sensibilities.  But Leaf House, at least for me, was yet another example in the rewards of patience.  There’s nothing wrong with hitting the stop button on an album and coming back to it some other time, especially if it’s one that you sense something redeemable about the music that qualifies as worth returning to.  I did that several times with Leaf House. I liked it well enough on my first two listens, but never really engaged with it much.  Several times after that, covering a span of [number] months, I slotted this album into my stereo, usually with adverse reactions.  There was one time I recoiled from it, so strong was its effect on me.  And then, on a day like today, I put the album in and sit transfixed by its monstrous beauty and thoughtful creativity, and so glad that I never gave up on it.

Some albums are like that.  This was one of those for me. I just wanted to share that observation, because I don’t think any of us can be reminded of the value of patience with art nearly enough.